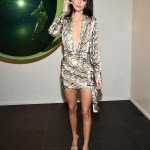 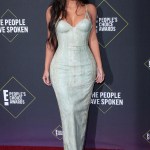 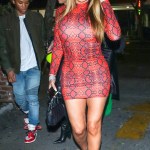 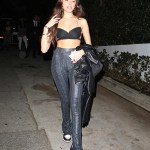 Snakeskin is in! Celebs like Kim Kardashian, Kendall Jenner and Larsa Pippen have styled the trendy animal print to perfection, and we’re taking a look back at some of our favorite ways the stars have worn the trend!

If you haven’t noticed, animal prints are having a major moment right now. Leopard is everywhere and even Kylie Jenner set aside her personal distaste for zebra print to rock it on a bodysuit for her 2019 calendar. But among the jungle theme is one pattern that’s particularly ssssexy: snakeskin! I mean, Kendall Jenner and Kim Kardashian donned it multiple times in the past, so you know it’s on-trend.

Kendall proved she isn’t afraid to take a walk on the wild side when she wore a plunging Ronny Kobo mini dress to the grand opening of the Times Square Edition hotel in New York on March 12. She paired the cream and brown ensemble with khaki Yeezy heels.

Like her little sis, Kim has also sported snakeskin, fashioning a wild look for the 2019 People’s Choice Awards. The social media maven stepped out for the industry event on November 10 in this vintage Versacesnakeskin dress. the ensemble hugged the mother-of-four’s curves to perfection and she let her long black hair down for the night out with her sisters and mom!

The Keeping Up With The Kardashians star was also spotted in snakeskin in fall 2018 when she watched daughter North West make her runway debut at the L.O.L. Surprise fashion show on Sept. 22. Kim looked chic in an oversized button-down shirt and vintage Gucci python pants. She tied the look together with faux-python mules from husband Kanye West‘s Yeezy Season 6 collection.

Even Larsa Pippen has gotten in on the sexy snakeskin style. The former Real Housewives Of Miami star showed off her incredibly fit figure in January when she was out and about in Los Angles! Larsa totally worked her red snakeskin mini dress, and looked flawless, choosing to pair the look with a set of strappy, peep-toe heels!

But Larsa, Kendall, and Kim aren’t the only stars that love this trend! Get scrolling through the gallery above to see how more fashion-forward celebs (like Hailey Baldwin and Ashley Graham!) have been styling snakeskin!