It wouldn’t be the People’s Choice Awards without the first family of Reality TV, the Kardashians. The clan arrived looking super chic, with Kourtney, Khloe and their mother Kris Jenner wearing variations of black and white flawlessly. The eldest sister showed some skin in a midriff-baring look, True‘s mom stunned in a sheer top and black skirt with a very high slit on one side and the world’s most famous momager sizzled in a black pantsuit with a heck of a lot of embellishment on the shoulders. Kim, on the other hand, opted to wear something much different by dazzling the PCA audience in a form-fitting foam green gown with no accessories needed.

Kim teased her ensemble hours beforehand. “I have @MakeupByMario & @ChrisAppleton1 doing glam today! I’m excited for this dress I’m wearing; I’ve wanted to wear it for a long time,” she tweeted. In this impromptu AMA, we learned that she loved her curls in the KKW Diamonds fragrance shoot (“I loved this hair and so did North”), that she was going to keep things “soft and pretty” with her makeup (“Pink cheek and soft lip, I think we’re going with”), and that she wasn’t coming alone. “Me, my mom Kris, Kourtney and Khloe” replied Kim when asked if the whole family was going. 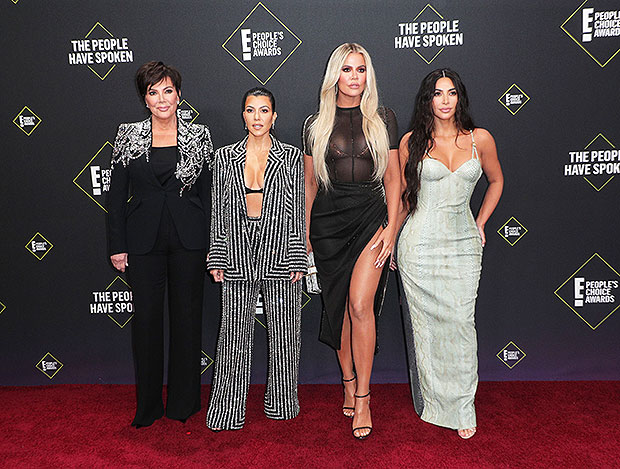 It was a big night for the KarJenners at the PCA’s. Keeping Up with the Kardashians won The Reality Show of 2019 against fierce competition like Bachelor in Paradise, Jersey Shore: Family Vacation, Love & Hip Hop: Atlanta, Queer Eye, Vanderpump Rules, The Real Housewives of Atlanta and The Real Housewives of Beverly Hills. Khloe beat little sister Kylie Jenner for The Reality TV Star of 2019. Kandi Burruss, NeNe Leakes, Antoni Porowski, Jonathan Van Ness, Kyle Richards, and Lisa Vanderpump were also nominated.

Related: Kim Kardashian As Marilyn Monroe: All The Times She’s Looked Like The Blonde Bombshell