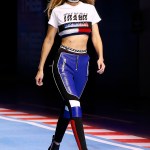 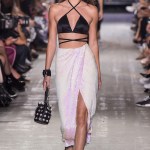 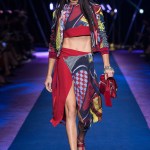 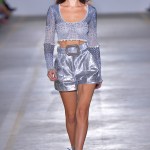 Models can be asked to wear just about anything on the runway, and a favored trend in recent years is definitely crop tops. Kendall Jenner, Gigi Hadid and more have rocked the look at fashion shows.

With abs like these, why cover up?! Fashion show looks can range from anything from quirky to sexy to super glamorous, and as Fashion Month continues, we’re taking a look at the runway crop top trend. Models from Bella and Gigi Hadid to Ashley Graham and Kendall Jenner and more have showed off their abs in crop tops while modeling over the years. While wearing skimpy bikini tops, longer crop tops with high-waisted pants and more looks, these gals have perfectly bared their toned stomachs on the runway.

Gigi’s rocked a few crop tops on the runway. One of our faves was a white and black graphic t-shirt from her and Tommy Hilfiger‘s collaborative collection. She rocked the shirt with blue leather racing pants, a white and black choker, and black booties during Milan Fashion Week on Feb. 25, 2018. Gigi also rocked the trend while modeling for Fendi at Milan Fashion Week in Sept. 2018. She wore high-waisted, tan pants with a crop top that fell just above her belly-button. The fierce look was paired with a matching belt, and Gigi looked SO fierce.

But Gigi isn’t the only one who has sported her rock-hard abs on the runway. Her sister Bella Hadid did the same at the Roberto Cavalli show on Sept. 22, 2018. Then, while modeling for Versace in 2019, Bella looked incredible in a teeny bikini top, which was paired with a sparkly blazer and matching pants. The blazer was left unbuttoned, so Bella’s abs were on full display.

Of course, Kendall Jenner has also gotten in on the un. She wore stringy bikini-inspired top for Alexander Wang in 2016. The black top was paired with a high-waisted white skirt, which was wrapped around Kendall’s waist. It had a leg slit, and the beachy look was complete with flip flops. Kendall also wore minimal make-up with this look, as the designer seemed to be going for a very natural appearance.

Click through the gallery above to check out photos of models like these, as well as Hailey Baldwin, Adriana Lima and more, who’ve rocked crop tops on the runway. We can’t wait to see what looks they all pull out at their next show!