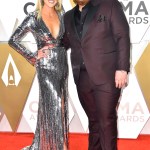 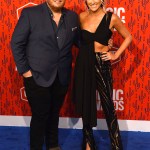 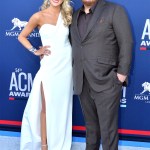 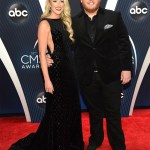 Nicole Hocking has been by Luke Combs’ side since he got his big break in country music. Learn more about the CMA Awards-nominated singer’s wife here.

Luke Combs is going into the 2021 Country Music Association Awards as a performer and three-time nominee. His nominations include the biggest honor of the night, Entertainer of the Year, as well as Male Vocalist of the Year and Song of the Year (“Forever After All”). Luke is already a five-time CMA Awards winner, and his wife, Nicole Hocking, has been his biggest supporter along the way.

Nicole and Luke met just as his career was first taking off in country music, so she’s been there for him through the wild ride of fame. She is the ultimate supporter, and is by her husband’s side on tour, at award shows and more. Plus, some of Luke’s biggest and most romantic songs songs — including “Beautiful Crazy” — are about Nicole. Learn more about Nicole and Luke’s relationship here!

How Did Nicole Meet Luke Combs?

Before officially meeting, Nicole and Luke moved to Nashville around the same time and knew of each other through mutual friends. However, it wasn’t until the Key West Songwriters Festival in May 2016 when they first connected. They were introduced by mutual friends while attending the event. When they got back to Tennessee, they reconnected when Luke asked Nicole out to dinner. By September, just four months later, they had made their relationship official. “I didn’t have anything going on when we met,” Luke admitted in 2020. “I didn’t have a record deal, or a publishing deal, or anything.” Meanwhile, Nicole was working seven days a week at two different jobs at that time. 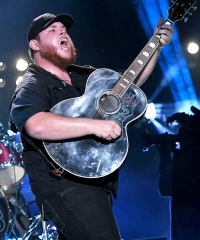 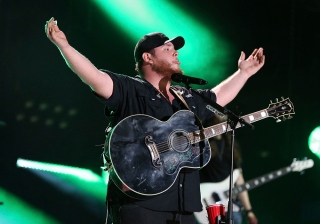 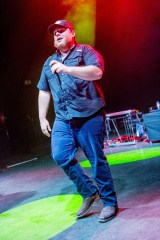 Luke proposed to Nicole in November 2018 after more than two years of dating. However, the proposal didn’t go exactly as planned! Luke wanted to propose to Nicole on the day they moved from an apartment in Nashville to the home they bought. He had bought the pair’s cats new collars with the new address, and was planning to put the engagement ring on one collar and surprise Nicole with it when the cat jumped on her lap.

Unfortunately, a stressful day of moving had the cats all riled up, and when Nicole and Luke finally got to the house at 11:00 p.m., the animals had to be bathed and cleaned, so there was no hope at the secret collar move working. But, since Nicole’s parents were flying in the very next day to celebrate the pending engagement, Luke knew he had to pop the question that night. “After I gave them their baths and everything, he was like, ‘OK, I got these collars for the cats with the new address,’ and he was like,’ And I also got you this!'” Nicole recalled. “And he went into the kitchen and pulled [the ring] out and got down on one knee and the whole thing. I black out, I don’t remember this. I wasn’t expecting it at all. Not in the least bit. Especially not in that moment!”

When Did Nicole Hocking & Luke Combs Get Married?

After more than a year of being engaged, Nicole and Luke tied the knot on Aug. 1, 2020 in Southern Florida. Hurricane Isaias threatened to ruin the big day, but luckily, it went off without a hitch. “Yesterday was the best day of my life,” Luke gushed on Instagram at the time. “I got to marry my best friend. “I love you Nicole Hocking. Here’s to forever.”

“I had a pretty solid feeling that I was going to cry,” Luke later admitted, of his wedding day. “But I didn’t know I was gonna cry that much, but I ddi. I was like doubled-over crying guy.” The wedding took place on the beach, and was smaller than expected due to the coronavirus. Luke revealed that he and his bride had to cut 70% of their guest list due to the coronavirus regulations put in place at the time. “At the end of the day, that ended up not mattering because it was still really beautiful and it was really everything that I wanted it to be,” he gushed.

Luke shared footage from the wedding in his music video for “Forever After All.” The video shows the two getting ready to walk down the aisle, exchanging rings at the altar, and kissing on the beach with the sun setting in the background after the ceremony. There are also sweet moments from the reception, including their first dance, and the moment they stuffed their wedding cake into each other’s mouths.

What Does Nicole Hocking Do?

Nicole went to Florida Gulf State University and received a Bachelor’s degree in Civil Engineering. When she first met Luke, she was working at Broadcasting Music Inc. in Nashville (BMI) as a recruiting coordinator. On the weekends, she was bartending to make some extra cash. “I’d work at BMI Monday through Friday, and that’s the music industry, so you’re not making that much money,” Nicole admitted. “And then I was bartending Friday, Saturday and Sunday. So I didn’t have time to go on the road or take days off really. That was when we were just starting out.”

Luke’s career took off pretty quickly after that, and by 2019, Nicole was able to join him on the road full-time. “I quit BMI last year,” she said in May 2020. “And went on the road with him full-time and here we are!” She added, “We’ve gotten used to living in small quarters together!” A typical day for the pair involves “waking up, eating, working out” and a nap for Luke, according to Nicole. “We kind of make the best of it!” she admitted.

Do Luke Combs & Nicole Have Kids?

Right now, Luke and Nicole do not have any children. However, during an Instagram Q&A, Nicole revealed that she and the country star plan to start a family one day. “Yess hopefully!” she gushed. “I want a big family.” They do have their two cats, though, as well as a rescue pup named Jojo!