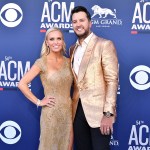 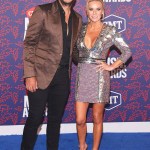 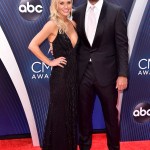 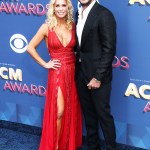 After nearly 15 years of marriage, Luke Bryan and his wife, Caroline, have become one of country music’s hottest couples. Learn more about the singer’s better half here!

On Nov. 10, 2021, Luke Bryan will take center stage as the solo host of the Country Music Association Awards. Of course, his gorgeous wife, Caroline Bryan (nee Boyer), will be in the audience to support her man, who’s also nominated for one award and will be performing at the show. Country music fans know that Caroline has been a staple at these award shows for years, as she’s supported Luke at various high-profile events throughout his music career.

In addition to getting dolled up on the red carpet, though, Caroline and Luke love showing off their love on social media. When the glam comes off, the two are just goofy college sweethearts who are still madly in love! Plus, they’ve created a beautiful family together. Learn more about Caroline and her relationship with Luke here!

How Did Luke Bryan & Caroline Meet?

Luke and Caroline met when they were both students at Georgia Southern University in the late 90s. Before heading to Georgia Southern, Luke got a two-year degree at a college closer to home following the death of his brother, Chris Bryan, in 1996. After transferring, he met Caroline when she was a freshman and he was a senior. At the time, Luke was playing music in a college band, and he met Caroline when they were at the same local bar together. 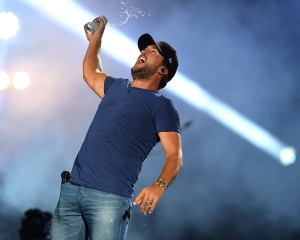 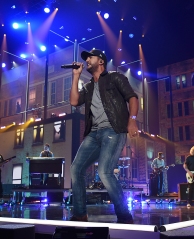 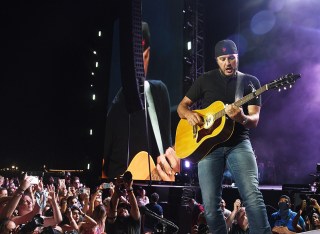 “We’re just in there, doing our deal, just enjoying college, and I see this group of girls walk in, and obviously Caroline’s one of them,” Luke revealed in his 2021 documentary, My Dirt Road Diary. “I was just like, ‘Who is that? I gotta figure out a way to strike up a conversation and do something cheesy, or whatever.'” Luke described meeting Caroline as “love at first sight,” although, at the time, she wasn’t initially ready for a boyfriend.

“I didn’t want anything to do with a boyfriend, but it kind of escalated into a little more,” Caroline admitted. During that time, Luke was playing in a college band. “I never knew a performer. I wasn’t impressed that he was a singer, I just liked who he was,” she explained. “He was quirky and goofy and funny and clumsy, but he was smart. It was just this big personality that I had never met in my life.” Unfortunately, Luke’s growing career and the pair’s age difference began to take a toll. “He’s gone a lot, and honestly, Luke was the second guy I ever kissed in my entire life,” Caroline said. “So I knew I wasn’t ready for that to be it. I just couldn’t love him the way he deserved. I had to grow up.”

The two split for good after a year and a half of dating on and off. “I just think our age difference put us on different paths,” Luke revealed, admitting that he was “heartbroken for many years” about the breakup. Luke moved home to be with his family, who was still mourning Chris, for a bit after that. Eventually, though, his father encouraged him to go to Nashville and follow his dreams for real.

When Did Luke Bryan & Caroline Get Married?

As he pursued his career in Nashville, Luke continued to return back to Georgia Southern to play shows. Those four or five shows a year were his only chances to see Caroline, who would still show up to check out the concerts. “If Luke was playing around town, I would go, which was totally messed up because I’m the one who broke up with him,” she said. “But I’d still show up to his shows and wave at him and talk to him and go hug him. I think he liked that. I think he liked me really showing up.”

For five and a half years, Luke and Caroline kept in touch “sporadically” via text message and e-mail, but the timing was never right for them to get back together. Finally, after he had already signed his record deal and had begun making a name for himself, they found themselves both single. She invited him to her family’s Christmas party in Atlanta. “She opened the door and we’re like BOOM,” Luke recalled. “I think I gave her a kiss and the rest was history.”

It wasn’t long before Caroline and Luke tied the knot on Dec. 8, 2006. The two originally had a “big wedding planned in Atlanta,” but they decided to nix the plans and have a smaller ceremony in Turks & Caicos. “We told anybody, ‘If you want to come, come. If you don’t, fine,'” Caroline reminisced. “It was a very small wedding, but the night was about just us and the closest people in our lives. I wouldn’t change it. It was awesome.” They’ve been together ever since.

Do Luke Bryan & Caroline Have Kids?

Shortly after tying the knot, Luke and Caroline found out they were expecting their first child. Their son, Thomas Boyer “Bo” Bryan, was born on March 18, 2008. He was followed by a second son, Tatum “Tate” Christopher Bryan, on August 11, 2010. As of 2021, Luke said that he’d gotten to a place where he considers his sons his “buddies.” The boys have similar hobbies to the singer, including fishing.

In addition to their two biological children, Luke and Caroline also adopted their nephew, Tilden “Til” Cheshire, in 2014. Til is the son of Luke’s sister, Kelly Bryan, and her husband, Lee Cheshire. Kelly died unexpectedly of unknown causes in 2007, and seven years later, Lee passed away, as well. Til was just 12 years old when his father died, and Luke and Caroline took him in. They also began caring for Til’s older sisters, Jordan Cheshire and Kris Cheshire, who were in their late teens at the time. Although Luke and Caroline never officially adopted Jordan and Kris, they’ve clearly become parental figures for the girls. Luke even walked Jordan down the aisle at her wedding in September 2021.

“Everybody has stepped up in this whole family and gotten through this time,” Luke said in his documentary. “There’s one thing on our minds and it’s the three children and trying to make the best decisions for them.” In a separate interview with ABC News, Caroline admitted that she and Luke “never thought twice” when it came to adopting Til. “It was never something that he and I had to sit down and talk about,” she explained. “Like, ‘Should we take this on?’ We just did that.”

What Does Caroline Do For A Living?

With Luke being out on the road amidst a growing music career during his sons’ younger years, Caroline held down the fort at home as a stay at home mom. However, in 2017, she founded Brett’s Barn in honor of her late niece, Brett Boyer. Brett was the daughter of Caroline’s brother, Bo Boyer, and his wife, Ellen Boyer. She died at just seven months old from Down Syndrome and a congenital heart defect.

“After Brett passed away, I decide to keep a promise I made to her when she was about a month old — a white pony!” Caroline explained on the Brett’s Barn website. “We found the pony at a local animal rescue facility. Along with the white pony, we adopted another pony, goat and pig. Over the next few months, the barn continued to grow. The promise I made to Brett, for one white pony, quickly turned into a full-blown miniature animal farm. Brett’s Barn now has over 20 animals! We are discussing various ways of expanding and, hopefully, will be open to the public soon.”

Brett’s Barn is privately funded, and any proceeds go to the Brett Boyer Foundation, which Bo and Ellen created as a way to raise awareness for Down Syndrome and congenital heart disease. The organization’s funds are given to promote research for both diagnoses.

At the beginning of 2021, Caroline also created her own clothing line called Best Bad Influence. She sells the sweatshirts, t-shirts, hats and more on the brand’s website.