Star of TLC’s ‘Sister Wives’ Kody Brown has a large family, with 18 children from four different women. Find out more about his wives — past and present — and his children here!

That’s one full house! Kody Brown, 52, star of Sister Wives, has his hands full with three wives, one ex-partner, and 18 children in total. Kody was raised in Wyoming by Genielle Brown and William Brown, who was also a polygamist and had three wives. “Every polygamous man has thought to himself how wonderful [monogamy] might be,” Kody told Us Weekly in February. “You know, ‘The grass is greener.’ … But every family in polygamy is very different.”

Find out more below about Kody’s four wives — both past and present — plus his 18 respective children — both biological and adopted! — he shares with the women.

Meri Brown, 50, was Kody’s first wife, as the two wed April 21, 1990. The couple originally met through Meri’s sister in 1989 and quickly became engaged and married the following year, when Kody was 21 and Meri 19. They were legally married until 2014 when they got divorced so Kody could marry his fourth wife, Robyn. 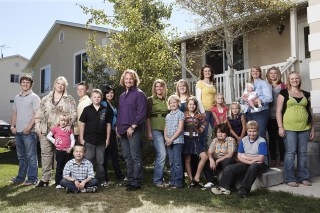 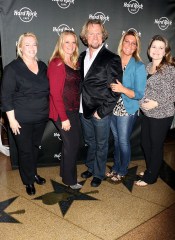 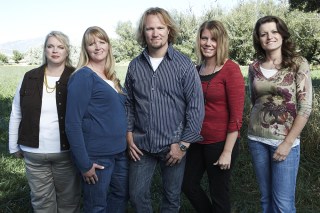 Although the pair have been together for quite a long time, in February this year, he told Us Weekly that their relationship had been “in a very dark place” for some time. “It’s been more about trying to get ourselves out of this hole that we dug ourselves into,” he explained. “I hope time heals things. I hope that some communication heals things. It’s been a long time and it’s been very difficult.” Meri also vented in a July Instagram post about “being manipulated” by her husband.

Born July, 29 1995, Mariah attended Westminster College until 2013 and then Loyola University where she studied social work. Mariah came out as a lesbian in 2017 and has since been in a relationship with Audrey Kriss. The pair were engaged in 2019. Back in 2017, after Mariah came out, dad Kody admitted he was “still in a state of processing” the announcement, considering the beliefs around homosexuality in the Mormon church.

Meri actually introduced Janelle Brown, 52, to Kody in the early ’90s and they were “spiritually married” in 1993. During the COVID-19 pandemic, Janelle told Us Weekly she thought there’d be more “camaraderie” due to their close proximity during the crisis. “I really think it would have been easier to deal with being quarantined if we were all under one roof because we’re having to be so separate,” she said at the time, noting it would be “easier” for them all if they weren’t taking care of “separate households.”

The oldest of Kody’s children overall, Logan, was born May 21, 1994. He grew up in Utah before his family moved to Nevada to escape anti-polygamy laws. He then ended up going to college in state, studying at the University of Las Vegas Lee Business School where he received a Masters in Business Administration He’s currently engaged to his fianceé of four years, Michelle Petty, and although he’s been featured on the show, he kept his relationship private and noted he did not want his wedding televised. He works as a business catalyst at the UNLV Center for Academic Enrichment & Outreach.

Hunter was born February 9, 1997 and majored in Biology at the U.S. Air Force Academy. His proud mama posted the above pic last July to celebrate his graduation from the academy, happy about his graduating in the top 10% of his class. Janelle announced he would be going on to receive his Masters at John Hopkins University and is studying to become a nurse.

Born April 10, 1998, Robert is also part of the military, originally aspiring to join the Army but then agreeing with his father to join the Nevada Army National Guard in 2015. He his own clothing line called Bob’s Floral, which deals in Hawaiian shirts, dresses, and swimwear, and, judging by his adventurous nature-loving Instagram posts, he loves to be outdoors!

Gabriel was born January 8, 2001 and was raised in Utah. He currently attends Northern Arizona University.

Born November 3, 1995, Madison studied at Utah State University but ultimately dropped out when she became engaged to now-husband, Caleb Brush. The couple married in 2016 and the ceremony was documented on Season 11 of the show. On May 20, 2017, the couple gave birth to a son, Axel James, after a 72-hour labor process and welcomed Evangalynn Kodi, on August 20, 2019. The now-two-year-old was born with a disorder that lead to missing fingers, toes, and leg bones, leading Madison to become an advocate for limb difference awareness.

Savanah was born December 7, 2004, and is the twelfth child of all the Brown children.

Kody met Christine Brown, 49, through her sister in 1990. During their first date on Valentine’s Day in 1994, Kody proposed, and they became “spiritually married” one month later. In November, the couple announced they were going their separate ways after more than 25 years together. “Christine’s decision to leave comes with a great deal of sadness,” Kody wrote in a statement at the time. “We enjoyed many years together and I have a large amount of respect and admiration for her. Although we are moving forward on different paths, we will always remain committed parents.”

Aspyn was born on March 14, 1995. Like her stepbrother Logan, she also graduated from the University of Nevada, where she studied Education and was a part of the Alpha Xi Delta sorority. She married her high school crush, Mitch Thompson, in 2018, and the couple currently resides in Utah.

Mykelti was born June 9, 1996. She owns fashion business called Mykelti’s Whimsical Boutique, despite her dad’s initial disapproval of her love for fashion. Her company is actually associated with her stepmom, Meri’s fashion company, LulaRoe, for which she serves as a “trainer” for team members. In 2015, she began dating Antonio Padron and the pair tied the knot in December 2016. Since their nuptials, the couple gave birth to daughter Avalon Asa.

Gwendlyn was born October 16, 2001. As one of the younger sisters of Christine’s troupe, Gwen posts about causes like Black Lives Matter on her Instagram page and also enjoys outdoor activities like hiking and seeing the sights of the Southwest.

Ysabel was born March 7, 2003. She graduated from high school earlier this summer and moved on to start college this fall.

Truely was born April 13, 2010 and her birth was well-documented on the first season of the show. She faced a dire situation in 2014 when she was brought to the hospital due to acute kidney failure and dehydration. Although she wasn’t expected to live, Truely pulled through and was sent home after eleven days.

Paedan was born August 7, 1998. Like his half brother Hunter, he joined the National Guard. Following high school, Paedon completed National Guard boot camp and graduated in 2019.

Robyn Brown, 43, was a divorced mother-of-three when she met Kody at church in 2009. The pair were “spiritually married” a year later, welcoming son Solomon in 2011 and daughter Ariella in 2016. In 2014, the couple was officially married so Kody could adopt Robyn’s three children from her previous marriage, son David, and daughters Aurora, and Breanna.

While speaking with Us Weekly in February, Kody shared his thoughts on expanding his blended family with Robyn even further. “I think it’s up to Robyn,” he said at the time. “But whenever I ask her, she always goes, ‘Well, it’s up to us. We make this decision together.'”

David was born January 21, 2000 with Robyn’s ex-husband David Preston Jessop and was adopted by Kody in 2015. The 21-year-old’s mom revealed that, as a child, he didn’t really speak until over a year old and he struggled with eating textured foods and hearing loud noises, concluding that he was on the autism spectrum. Robyn detailed Dayton’s venture into college in 2018 in the above Instagram post where he looked packed up and ready to go for his new venture!

Aurora, born April 11, 2002, is Robyn’s second child with David and was also adopted by Kody in 2015. Since then, she changed her last name from Jessop to Brown.

Breanna was born July 10, 2005 and was Robyn’s second child with David. She was also adopted by Kody and also changed her surname to match the rest of the Brown family.

Solomon was born October 26, 2011. Mom Robyn often shares adorable pics of Solomon and his younger sister, Ariella, as the two love taking part in family activities with their half brother and sisters. In the above photo, “Sol and Ari” are all smiles making pasta from scratch with older half sister Aurora!

Ariella is the youngest of all the children, born January 10, 2016.