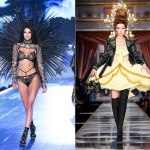 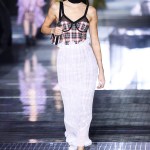 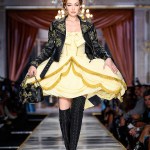 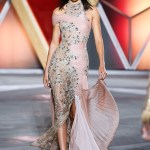 Kendall Jenner and Gigi Hadid are besties AND amazing models, and they’ve both rocked dozens of runways over the years. Here are their best runway looks of all-time!

With another Fashion Month well underway, we’re looking back at some of our favorite runway looks from two of our favorite models: Kendall Jenner and Gigi Hadid! Kendall and Gigi are besties both on and off the runway, and we’ve loved so many of their sexy modeling looks over the years. Kendall has taken a step back from walking runways these days, but over the years, we’ve seen her walk for some of the biggest brands in the industry, including Versace, Moschino, Tom Ford and more.

Kendall looked beyond amazing while walking the Tom Ford show in Los Angeles in 2020. She wore a sheer, lacy black dress, which featured a cutout across the middle. The dress was floor-length, but Kendall’s figure was visible underneath the fabric. She completed the look with her hair slicked back into a bun. We also loved her look for the Moschino show at Milan Fashion Week in 2018. Kendall’s long legs were on full display in a pink and black mini dress, which had a long, white and pink bow that flowed down her back. She also wore gloves and tights that matched.

One of Gigi’s hottest runway looks was at the Michael Kors show during New York Fashion Week iN Sept. 2018. She wore a long black dress, which featured a majorly plunging neckline and side cutouts. While the lower half of Gigi’s body was covered up, her abs were on display and she looked incredible in the sexy dress.

Both girls have also walked in the Victoria’s Secret Fashion Show multiple times. They’ve worn a variety of lingerie looks for the famous, televised show, and we’ve loved them ALL. Click through the gallery above to check out photos of Kendall and Gigi’s best runway looks of all-time!