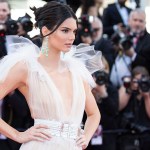 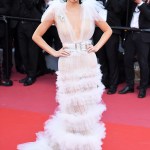 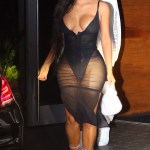 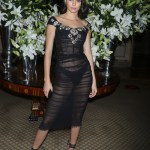 See photos of the Kardashian and Jenner sisters rocking sheer looks over the years!

The KarJenner sisters know how to totally own a red carpet with their epic and daring fashion choices. But one trend that the sisters have never been averse to breaking out is sheer fabric. The sisters love a sheer look, rocking the style in ensembles they’ve worn to film premieres, parties, and more events. Let’s take a look at some of their very best sheer looks over the years.

When she stepped out in New York City in September 2016, all eyes were on Kim Kardashian. The stunning mother-of-four, 40, wore a daring dress that featured a leotard bodysuit beneath totally sheer fabric that ran down to her knees. Her dress also featured a plunging neckline and a glittering choker to add some sparkle to her look.

Kendall At The 2018 Cannes Film Festival

Kendall Jenner went to a couple of star-studded red carpet events at the 2018 Cannes Film Festival. While attending the premiere of Girls of the Sun in May 2018, the model, 25, wore a stunning white tiered tulle gown by Parisian couture house Schiaparelli. Kendall looked positively angelic in her outfit, and the sheer fabric looked gorgeous on the young star, who definitely left an impression on the red carpet.

Kourtney Kardashian looked absolutely sensational at the Clive Davis Pre-Grammy Party in Los Angeles on February 11, 2017. She wore this structured black sheer dress, which also featured cutouts around the star’s torso. The mother-of-three, 41, looked fabulous in her frock, and proved that she could own a red carpet as well as any of her younger sisters!

There was absolutely no denying how gorgeous Kylie Jenner looked at the May 2017 Met Gala. The Lip Kit mogul, 23, wore this stunning Versace dress that featured a sheer skirt and was absolutely dripping in jewels and floral appliqués. Kylie’s look was a total showstopper, but there is so much to see beyond these four fabulous fashion statements. Take a look through the gallery above to see more times the KarJenner sisters fashioned sheer looks through the years.