Though Juice WRLD is gone, he certainly hasn’t been forgotten, and the prolific rapper continues to have a presence on the charts and in the hearts of all the fans who loved him during his short time here on earth. With his first posthumous album Legends Never Die, a project that debuted atop of the Billboard albums chart, Juice established himself as a prominent voice of his generation, and one that was silenced too soon. Now, with his estate promising a second posthumous project, a three-part epic that kicks off with The Party Never Ends, now is the time to reacquaint yourself with the rapper, and learn everything you need to know about his upcoming album.

Born Jarad Higgins in 1998 in Chicago, Illinois, Juice WRLD began freestyling in high school, according to All Music. He began recording as Juice The Kidd, a name inspired by Tupac Shakur’s film, Juice. He released his early work to SoundCloud in the mid-2010s – including a handful of EPs, most notably 2017’s  Juice WRLD 999 EP. Featuring songs like “Lucid Dreams (Forget Me)” and “All Girls Are the Same,” which would make it to his official debut full-length, Juice WRLD waved together sounds from the rock and hip-hop world, blending them with emotional-laden lyrics. He soon became a prominent figure in the emo-rap movement of the 2010s, a nebulous genre (which has been associated with acts like XXXTentacion, Princess Nokia, Lil Peep, and The Kid LAROI.)

Juice’s debut album, Goodbye & Good Riddance, arrived on May 2018 via Interscope records. It peaked at No 4 on the US Billboard 200 and has since been certified Platinum by the RIAA. The following year, Juice dropped Death Race For Love in March 2019. The sophomore album debuted at No. 1 on the Billboard 200 and featured the double-platinum certified single “Robbery,” as well as the gold-certified “Hear Me Calling.” With high-profile collaborations with BTS (“All Night”), Ellie Goulding (“Hate Me”), and Benny Blanco (“Graduation”), Juice WRLD seemed poised for greater mainstream success. Then, tragedy struck.

On December 8, 2019, Juice WRLD died from an accidental overdose at Advocate Christ Medical Center in Oak Lawn, Illinois, per Vulture. He had been transferred from Chicago’s Midway International Airport after suffering from a “medical emergency” as federal agents searched the private jet he arrived in. Juice went into convulsions after reportedly swallowing multiple Percocet pills and a federal agent administered the opioid antidote Narcan. The raid on the airplane turned up 70 pounds of cannabis in 41 vacuum-sealed bags, six bottles of prescription codeine cough syrups, and three firearms, according to The New York Times. A month after Juice WRLD’s death, the Cook County Medical Examiner’s office ruled he died from oxycodone and codeine toxicity. He was 21.

In July 2021, fans of Juice learned that new music was coming soon was on the way. The rapper’s estate confirmed that the album would be released as a trilogy, and a trailer for the first installment, titled The Party Never Ends, was posted online.

“I can’t guarantee the album will be this month, but pretty soon,” said Peter Jideonwo, the late rapper’s manager, said during an Instagram Live session in July, per Hypebeast. “The Party Never Ends is going to be the best album, not only musically but creatively. We got a big collab on the album cover and also the merch. Everything about it is fire. We’re not just doing some basic music…we’re taking our time to craft a classic you’ll talk about for the next ten years.”

Lil Bibby, the rapper who singed Juice to his Grade A Productions, also tweeted (and deleted) in July that the final album would be a three-parter. Lil Bibby also said (in a now-deleted tweet) that the album was about 90% done, and they were “just waiting on [Travis Scott]” and fans should “spam him.” Travis and Juice teamed up for “No Bystanders” off of Astroworld, the song where The Party Never Ends seemingly gets its name from (“The party never ends / In a motel layin’ with my sins, yeah / I’m tryna get revenge / You’ll be all out of love in the end.”) 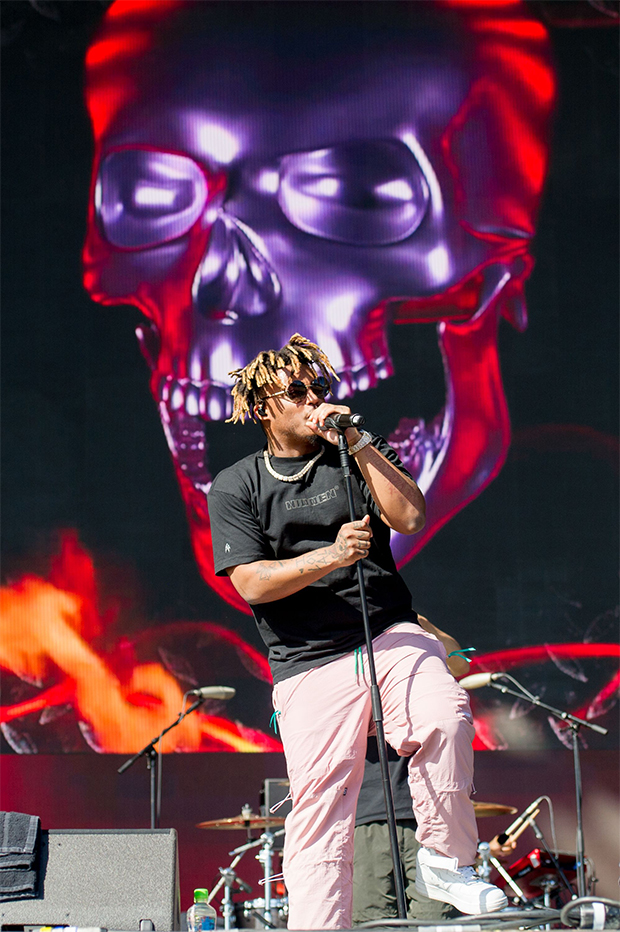 As of August 2021, there is no release date for The Party Never Ends (or the two other parts of the album.) There is not a confirmed tracklisting, either. Genius posted an unconfirmed list of songs that included “I Need You,” “GoPro,” “Oxy In The Dark” as well as “Go Hard,” a song featuring Lil Uzi Vert. Juice WRLD’s team said in an interview that Lil Uzi was going to be on the EP, according to Hot New Hip-Hop, and that people need to “stop leaking f-cking music.”

During Peter Jideonwo’s IG Live session, he took some questions and said that The Kid LAROI would not be on the album, nor would Drake and J. Cole.

Life Since His Death

“The overwhelming love that millions of music fans clearly have for Jarad reminds us how much his poetic words, creativity, and bright light continues to shine throughout the world,”  Juice WRLD’s mother, Carmela Wallace, and his company Grade A said in a statement. “his first collection of songs is a poignant reminder of his great artistic talent and emotional honesty. Music was his passion and recording gave him the outlet to share everything he was going through. In addition to his music, Jarad’s legacy will continue to provide help to young people through his Live Free 999 Foundation. We are incredibly grateful to the fans who continue to uplift him every single day and our hope is that his words touch your life in a way that helps you through any challenges you may be facing.”

By the end of the year, Legends Never Die would have more than 2.3 billion audio streams, per Rolling Stone. The publication also listed it as the fifth best-selling album of the year, while Billboard put it in the Top 10.

In April 2020, Juice’s mother created the Live Free 999 Fund, a “charitable organization which aims to help young people struggling with their mental health,” per Variety. “I made the decision upon his death that I was going to share his struggles with the world with the objective of helping others,” his mother said in a statement. “It is my desire to help those who are hurting by providing access to education, prevention and treatment for opioid and other forms of drug addiction. It is my hope that Live Free 999 will help people just as Jarad’s music has and will continue to touch lives for years to come.”