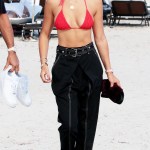 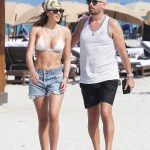 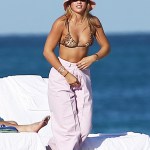 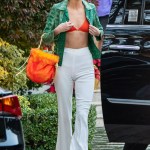 While we’re stuck inside for the spring, we’re daydreaming of summer! These celebs have us in the summertime mood with their bikini top style. We’re looking back at our favorites!

Summer will be here before we know it! And once we’re back out enjoying the sunbeams it’s imperative that we all stay cool while looking as sexy as possible. Thankfully, certain celebs have made it easy to pull off a new look that’s sure to make all of your friends jealous over your outfit! Emily Ratajkowski, 28, memorably stepped out in New York City with her husband Sebastian Bear-McClard, 33, wearing some cargo jeans and a tied-up bikini top. Not only does she slay on the beach with her swimsuit fashion, she’s killing it with this look perfect for when the Big Apple gets a little too toasty. But she’s not the only celeb who has rocked this look.

The list of celebs who have worn bikini tops out in public keeps on going! Before their unexpected split, Halsey, 25, and her boyfriend G-Eazy, 30, were spotted sweetly holding hands at Coachella. While the pair were wearing face masks, Halsey also wore a sexy bikini top. Joining her on this list is none other than Bella Hadid, 23, Not only was she seen wearing a white bikini top while out and about, her sister was also seen pulling off this look!

That’s right, Gigi Hadid, 24, showed off her epic dance moves on stage at the Victoria’s Secret Spring Break Pink Party in Miami back in 2015. While her then-boyfriend Cody Simpson, 23, performed, Gigi wore a multi-colored bikini top perfect for the festive occasion. Honestly, we don’t know which sister pulled off this look better. But one fellow model of the sisters who worked her own bikini top was Kendall Jenner, 24! Kendall was spotted getting ready for beach day, waring a pair of high-waisted white pants with a green jacket and orange bikini top! She gave the look a funky edge with her bright orange bag.

Even Bella Thorne, 22, has gotten in on the bikini top craze. While on a walk in Miami Beach, Bella was spotted in a matching outfit featuring a skirt and bikini top. She layered a slew of necklaces to accessorize her look, along with a pair of retro sunglasses and a number of bracelets! But there are so many more stars rocking this trend than just the ones we’ve mentioned. Check out all of your favorite stars who have worn bikini tops in public in our gallery above!