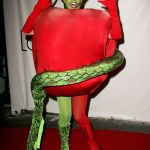 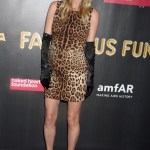 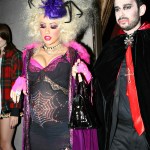 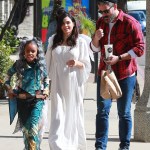 From Christina Aguilera to Heidi Klum, these stars got creative when it came to dressing up their baby bumps for Halloween!

Over the years, celebrities have turned their pregnancies into brilliant Halloween costumes! Since the spooky holiday is just a little over three weeks away, we’ve rounded up the best celebrity maternity Halloween costumes to inspire our expecting readers.

Stars like Christina Aguilera, Beyoncé, Jennifer Garner, Heidi Klum, Jenna Dewan, Jessica Alba and more should help you start brainstorming on how to implement your bun in the oven into this year’s costume! Check them out below:

It was Halloween 2007, and Christina Aguilera was pregnant with her first child, Max Liron Bratman. The singer came up with a brilliant idea: turn her baby bump into a spiderweb! Christina completed the costume with a tarantula-themed ensemble, complete with a gigantic spider headpiece. The pop star’s husband at the time, Jordan Bratman, complemented Christina with a Dracula costume to become the ultimate spooky couple.

Beyoncé’s fanbase is known as the Beyhive. So, for Halloween in 2011, Queen Bey had fun with the nickname by dressing up as a queen bee while expecting her first child with husband JAY-Z! Beyoncé later traded a bumble bee costume for a hospital gown to welcome her daughter Blue Ivy Carter in Jan. 2012.

Jennifer Garner took inspiration from Peter Eastman’s “Big Dog…Little Dog” book series for her Halloween costume in 2008. The 13 Going on 30 actress and her daughter Violet Affleck, who was two years old at the time, dressed up as the dogs Fred and Ted from the children’s book “Fred and Ted’s Road Trip” and it was adorable! Jennifer was expecting her second child, Seraphina Affleck, with Ben Affleck during that Halloween.

Heidi Klum is the queen of Halloween, a title that she upholds at her annual Halloween party. The super model was eight months pregnant with her and Seal’s son Johan Riley Fyodor Taiwo Samuel at her seventh annual Halloween party in 2006, so she hid her baby bump in this Forbidden Fruit costume! Heidi went all out for this Biblical-themed costume, complete with the serpent that tempted Adam and Eve with the apple that God had instructed them not to eat.

Jenna Dewan was expecting her second child (and first with actor Steve Kazee) in Halloween of 2019! While the baby had yet to arrive, the Step It Up actress made sure that they still matched with this skeleton bodysuit. Right on the top of Jenna’s baby bump was a graphic of a baby skeleton — how cute! The actress also dressed up as an angel amid the Halloween season, which you can see in our gallery above.

#juno #happyhalloween @kellysawyer and I 👫

Jessica Alba rocked a classic pregnancy costume for Halloween of 2017: Juno, from the 2007 movie of the same name. The comedy follows a teenage girl who unexpectedly gets pregnant by her high school boyfriend, whom Jessica’s friend Kelly Sawyer dressed up as in the photo above. The Sin City star was expecting her third child, Hayes Alba Warren, with husband Cash Warren at the time!

Nicky Hilton, who was pregnant with her and husband James Rothschild’s second kid, dressed up in one of the most classic Halloween costumes for the 2017 Fabulous Fund Fair: a cat! The hotel heiress looked classy in a leopard print dress, satin elbow gloves and a lacy cat mask.

Molly Sims was expecting her third child, Scarlett May Stuber, with husband Scott Stuber by the time Halloween rolled around in 2014. That didn’t stop the model from throwing on her brightest pink jumpsuit — complete with a neon pink wig — to head to the Casamigos Tequila Halloween party!

Ashley Graham dressed up her baby bump in a glamorous red latex gown to transform into the iconic Jessica Rabbit from the 1988 movie, Who Framed Roger Rabbit, for Halloween in 2019! Meanwhile, the model’s husband Justin Ervin dressed up as Macho Man. Ashley shared photos of their couple’s costume on Instagram and wrote, “Macho Man knocked up Jessica Rabbit for Halloween.”

Bachelor alum Carly Waddell dressed up as a gnome with her husband Evan Bass and daughter Isabella “Bella” Evelyn for Halloween in 2019! The Bachelor Nation star was pregnant with her and Evan’s second child, and so she wore a little mushroom on top of her baby bump. “I don’t Gnome about you…but we sure do LOVE Halloween over here,” Carly wrote in her Halloween post pictured above.

12 weeks pregnant – only 6 more months to go!🙃 Doc apt tomorrow!🤰🏼 We have the NT scan to check on baby (and get my blood drawn for the GENDER!) And of course I’ll let ya know how it goes & share pics of this little “thing” growing inside me.😝👶🏼🌈 • PS I can’t remember which of you told us to do this costume but THANK YOU! Totally plan on recreating this next year with Thing 2 here.🤗 So fun! • • • #rainbowbaby #bumppic #girlmom #happyhalloween #prego #pregnantbelly #firsttrimester

Married at First Sight and Bachelor star Jamie Otis had extra fun with her baby bump for Halloween 2019! The reality television star and her husband Doug Hehner teased that “Thing 2” — AKA, their second child together — was on the way in these Dr. Seuss-inspired costumes that the parents wore with their first child, Henley Grace Hehner.