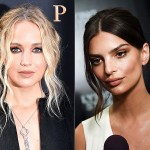 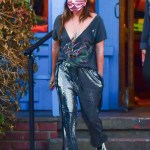 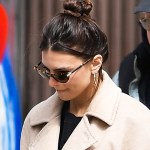 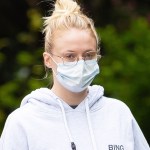 So many stars have been loving the messy bun hairstyle & stars like Kylie Jenner & Emily Ratajkowski have been rocking the look both on & off the red carpet!

One hair trend that never goes out of style is without a doubt, the messy bun. Not only is the messy bun a super easy and convenient hairstyle for an everyday look, but it can also look stylish. Emily Ratajkowski, 28, has been rocking a slew of different hairstyles during quarantine and we loved her messy bun when she took her dog, Colombo, for a walk in NYC on March 22. Emily rocked a pair of jeans, a black sweater, and an oversized tan Max Mara Jago Coat that featured a tie belt that was cinched around her tiny waist. She accessorized her look with a pair of white Nike Air Max Sneakers, Versace Ve4365Q Sunglasses, and a high messy bun that sat atop her head.

Kylie Jenner rocked the trend when she posted a sexy selfie in her undergarments to Instagram on December 29. Her hair was slicked back into a bun in the photo, similar to the style she wore a day prior, on Dec. 28, when she posed for pics with her BFF, Anastasia Karanikolaou. For their photoshoot, the girls wore matching patent leather trench coats lined with fur as they both had their hair slicked back into tight messy buns. This is certainly not the first time Kylie has tried the trend and she tried the look again when she was on a lavish yacht vacation in Monte-Carlo, Monaco back in August. She looked fabulous when she threw her jet-black hair into a slicked-back messy bun, topping off her look with massive chunky blue hoop earrings.

Another celeb that loves the messy bun is Gigi Hadid, who is constantly rocking one. Gigi has been around the world and back lately for fashion month and her go-to hairstyle is the messy bun. One of our favorite looks from her recently was when she headed to the Heron Preston Fashion Show during Paris Fashion Week on June 18, rocking a champagne-colored suit with bursts of color all over it. She topped the look off with velcro sandal heels and threw her gorgeous blonde locks into a high messy bun at the top of her head, accessorizing with rose-colored sunglasses and a puka shell Eliou Paxi Necklace. Before this look, Gigi has been rocking the messy bun almost every day.

Selena Gomez rocked a messy bun at the New York City premiere of her new film The Dead Don’t Die on June 10. Selena looked gorgeous on the red carpet in a strapless black Celine Spring 2019 mini dress, that was off-the-shoulder, showing off massive cleavage, and had huge feather sleeves. The best part of her look though, was her hair, done by, Marissa Marino, who threw Selena’s hair up into a messy bun and parted it in the middle, leaving a few pieces of hair left out on either side of her face, framing it in gorgeous beach waves. As for her makeup, done by her longtime artist, Hung Vanngo, Sels went with a dark smokey eye with extra long lashes and a nude matte lip. Her nails were done by manicurist, Tom Bachik, who topped off her look with a white manicure.

Jennifer Lawrence rocked a similar look to Selena’s when she opted to wear a messy bun with beach waves at the Los Angeles premiere of X-Men: Dark Phoenix on June 4. JLaw wore an insanely plunging black sheer Christian Dior Resort 2020 gown on the red carpet, and topped her look off with a gorgeous messy bun, done by hairstylist, Jenny Cho. Jenny threw JLaw’s gorgeous blonde hair up in a messy updo, with wavy pieces left out in front, framing her face in gorgeous blonde beach waves. There were so many other gorgeous messy bun looks that celebs have worn, which you can see when you click through the gallery above!