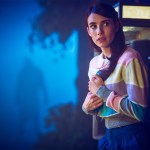 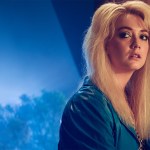 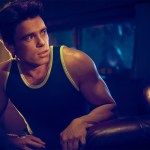 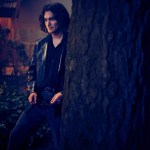 The first teaser for ‘American Horror Story’ season 10 has arrived, and it is downright wild. From aliens to sea monsters, let’s do a deep dive into this terrifying footage.

American Horror Story fans are waiting on the edge of their seats for more news about season 10. The theme for season 10 is Double Feature, and Ryan Murphy is taking things to a whole new level for the milestone season. The first teaser dropped on July 27 and gave fans a glimpse at what lies ahead.

The AHS co-creator has already revealed a number of clues about season 10 and the star-studded cast over the past year. The full-length hints at a truly unprecedented season of American Horror Story. HollywoodLife has every key thing you need to know about AHS season 10.

“A collision of terror like you’ve never seen,” the tagline for American Horror Story: Double Feature reads. The scary teaser features terrifying aliens and what looks like a sea monster with sharp teeth. Part 1 of Double Feature is titled Red Tide. A sea monster appears to attack something underwater.

Part 2 is called Death Valley. Aliens are taking over AHS. At one point, the monsters of Red Tide and Death Valley come together and… kiss? Their worlds are colliding, and the aftermath is going to be grizzly. The final moments of the teaser feature what looks like a dead alien washing up on the shore.

Production on season 10 was supposed to start around March 2020, but filming was delayed due to the COVID-19 pandemic. Ryan gave an update in Aug. 2020 about the state of season 10’s production. “Looks like American Horror Story Season 10 is go for an October (fitting) production launch,” he captioned one of his season 10 clues — the one of the teeth — on Instagram. “Thanks to everyone who is working hard to assure a safe start for the cast and crew.”

Ryan posted the first photo from the season 10 set on March 10, 2021. Season 10 cast members Leslie Grossman and Macaulay Culkin are arm-in-arm on the beach. Leslie has on a gray fur coat and fur hat, while Macaulay looks a bit more rugged in a brown fleece jacket and green sweater. “Something wicked this way comes,” Ryan captioned the photo. He also tagged season 10’s filming location: Provincetown, Massachusetts.

Ryan announced the highly-anticipated theme on March 19, 2021. He posted a short video that revealed the theme is American Horror Story: Double Feature. There will be “two horrifying stories” in one season. “One by the sea… one by the sand,” the video said.

Ryan revealed the season 10 poster in November 2020. The poster features a mouth with razor-sharp teeth that’s opening wide as a gloved hand tattoos “AHS 10” onto the tongue. Ryan didn’t caption the photo, but he did set the location for the photo as Provincetown, Massachusetts. The setting of season 10, perhaps?

When a fan said the poster looked familiar and asked about another crossover, Ryan commented, “Nope.” Leslie Grossman, who is set to star in season 10, commented, “Ouch.” Ryan responded, “You should be very afraid. xo.”

Back in March 2020, Ryan posted an Instagram photo of two dirty hands grabbing onto twigs with an ocean in the background. He had the American Horror Story season 10 logo emblazoned over the top. “Things are beginning to wash up on shore…” Ryan captioned the photo. A few months later, he posted another clue. He shared just a simple photo of a beach with some tangled fencing, further adding to evidence of a possible theme related to the ocean.

A few months after that in Aug. 2020, Ryan posted a creepy Instagram photo of sharp teeth. He announced that filming would start in Oct. 2020 and added that the picture of the teeth are a “clue.” Many fans pointed out that this photo could hint at sirens in season 10. Back in Oct. 2019, HollywoodLife spoke EXCLUSIVELY with Ryan about deciding the season 10 theme. “I decide always on Halloween day, and I have two ideas that I’m going back and forth with, so I don’t know which one is going to win,” Ryan said at the time.

However, the season 10 theme could be completely different from what Ryan had initially decided. He revealed to The Wrap that “a lot of what I was going to shoot was dependent on a very specific moment, it was a weather-dependent show.” He added, “So now I don’t know. I don’t know what we’re going to do. I don’t know what I’m gonna do next with that show. I don’t know if I’ll accelerate another season or wait until next year to shoot this one.”

Ryan announced the cast of season 10 in Feb. 2020. He posted a video on Instagram of a beach with Orville Peck’s “Dead of Night” playing and revealed the new season’s cast: Leslie, Kathy Bates, Macaulay Culkin, Billie Lourd, Sarah Paulson, Evan Peters, Adina Porter, Lily Rabe, Angelica Ross, and Finn Wittrock. Given season 10 was supposed to start filming earlier in 2020, the cast could be changing due to scheduling conflicts, but nothing has been announced yet.

On March 23, 2021, Ryan revealed on his Instagram that 19-year-old model Kaia Gerber, the daughter of Cindy Crawford and Rande Gerber, would be joining the cast of season 10. “Very excited to announce that Kaia Gerber is joining the American Horror Story family,” he wrote.

American Horror Story: Double Feature will premiere on August 25, 2021. The episodes will be available to stream the next day on FX on Hulu.

The Future Of ‘AHS’

Since its premiere date in 2011, American Horror Story has become one of the most popular shows on television. FX chairman John Landgraf announced in Jan. 2020 at the Television Critics Association winter press tour that AHS has been renewed through season 13. The wait for season 10 will be long, but at least we know we have plenty of more seasons of AHS goodness left.