Swifties have long awaited a new tour from “Anti-Hero” singer Taylor Swift, 32, but getting tickets to her Eras tour proved to be a disaster. After two presales, Ticketmaster was forced to cancel the general on-sale for Taylor’s tour due to the “extraordinarily high demands”. Fans who didn’t get tickets were devastated, and those who were able to get tickets were upset about the hoops they had to jump through to do it. 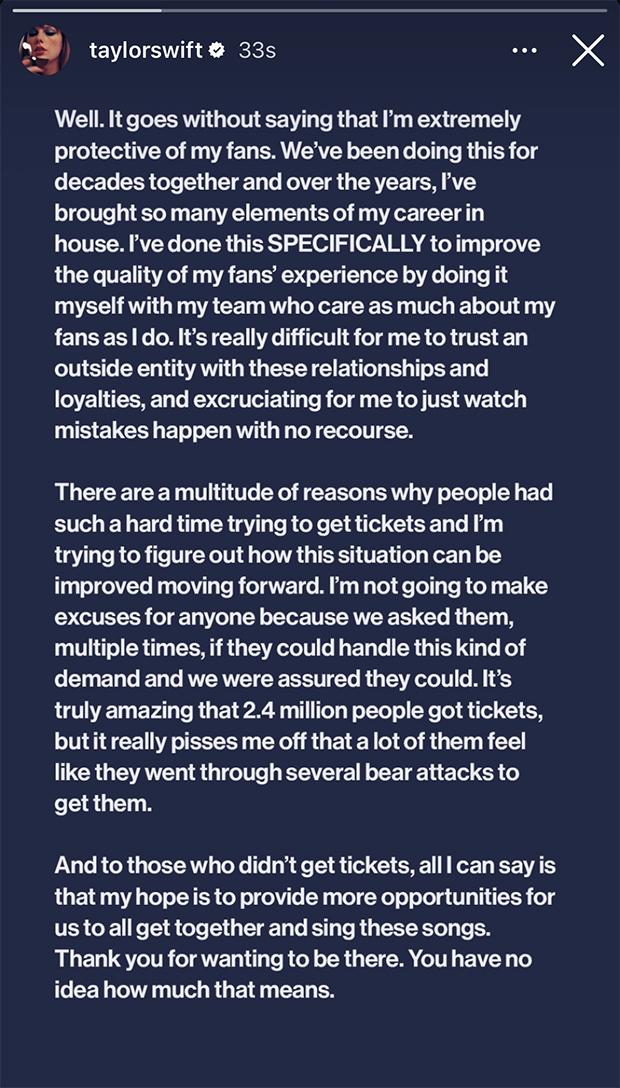 “It goes without saying that I’m extremely protective of my fans,” Taylor wrote on Instagram Story on Nov. 18. “We’ve been doing this for decades together and over the years I’ve brought so many different elements of my career in house. I’ve done this SPECIFICALLY to improve the quality of my fans’ experience by doing it myself with my team who cares just as much about my fans as I do.”

Taylor admitted that she finds it difficult to trust an outside entity like Ticketmaster, but was “assured” they could handle the demand. “There are a multitude of reasons why people had such a hard time trying to get tickets and I’m trying to figure out how this situation can be improved moving forward,” she continued. “I’m not going to make excuses for anyone because we asked them, multiple times, if they could handle this kind of demand and we were assured they could. It’s truly amazing that 2.4 million people got tickets, but it really pisses me off that a lot of them feel like they went through several bear attacks to get them.”

Taylor concluded her statement by promising those who didn’t get tickets that she hopes to provide more opportunities for them to see her live in the future. “Thank you for wanting to be there,” she wrote. “You have no idea how much that means.”

Due to extraordinarily high demands on ticketing systems and insufficient remaining ticket inventory to meet that demand, tomorrow's public on-sale for Taylor Swift | The Eras Tour has been cancelled.

After the 32-year-old songstress announced her tour via Instagram on Nov. 1, it was only a matter of weeks until mayhem ensued on the Ticketmaster website. Leading up to the Nov. 15 presale date, fans were urged to get “verified” by Ticketmaster, and the site then selected fans to receive presale codes. Once the presale began, fans found themselves waiting for hours in a queue just to get tickets. Many had trouble even using their access codes, and many also experienced glitches with the site. A second presale for Capital One cardholders began on Nov. 16, but sold out almost immediately.

The biggest issue was that, although 14 million people and bots were let into the site during the presale, only 1.5 million were actually supposed to be granted access. Of course, this led to millions left without a ticket to the long-awaited tour.

Later, on Nov. 17, Ticketmaster took to Twitter to officially announce that the general sale on Nov. 18 for Taylor’s tour was officially canceled. “Due to extraordinarily high demands on ticketing systems and insufficient remaining ticket inventory to meet that demand, tomorrow’s public on-sale for Taylor Swift | The Eras Tour has been cancelled,” the tweet read. Understandably, many Swifties were upset by the news and replied to the tweet with their reactions. “how could you sell out all the tickets in presale when only 15% was supposed to be released,” one person wrote, while another chimed in, “oh my god? how does that solve anything.”

Many of the Grammy-winner‘s fans have also taken to Twitter to write that Taylor should’ve released a statement, prior to her actually releasing one. “i don’t know who needs to hear this (a lot of you) – but you can be a die-hard Taylor Swift fan and still be upset with her & Taylor Nation’s silence and lack of transparency regarding the entirety of this ticket process,” one of her followers tweeted. Another die-hard Swiftie wrote a message for the recording artist along with a set of photos of her Taylor decorated bedroom. “Taylor Swift my [broken heart emoji] your silence is deafening during this Ticketmaster crisis. We have been by your side, ride or die for 16 years. Where are you? Surely there are some words you have to offer us comfort? Look how much I love you @taylornation13 @taylorswift13,” the fan wrote.

Live Nation has also spoken out in reaction to the controversy, defending Ticketmaster (which is part of the same company). The concert promoter called Ticketmaster “the most transparent and fan-friendly” service available in a statement. “Ticketmaster has a significant share of the primary ticketing services market because of the large gap that exists between the quality of the Ticketmaster system and the next best primary ticketing system,” they also said.

“The market is increasingly competitive nonetheless, with rivals making aggressive offers to venues. That Ticketmaster continues to be the leader in such an environment is a testament to the platform and those who operate it, not to any anticompetitive business practices. 5 years ago tickets were paper, now you scan in with your phone, and can transfer tickets to your friend with one tap. We innovate and invest in our technology more than any other ticketing company, and we will continue to do so,” they also wrote.

Taylor released her most recent album, Midnights, on Oct. 21, nearly one year after she released Red (Taylor’s Version) on Nov. 12, 2021. It has since become a hit album breaking multiple records including having claimed all top 10 spots on the Billboard Hot 100 during a single frame. Other notable accomplishments include third-largest streaming week for an album – ever for a female artist, per EW. And on the day of its release, Midnights became the most streamed album in a single day on the Spotify app.

On the eve of the album’s release, Taylor took to Instagram to write to her 232 million followers about what the album meant to her. “Midnights is a wild ride of an album and I couldn’t be happier that my co pilot on this adventure was @jackantonoff. He’s my friend for life (presumptuous I know but I stand by it) and we’ve been making music together for nearly a decade HOWEVER… this is our first album we’ve done with just the two of us as main collaborators,” her caption read. The carousel of photos included her pal and actress Zoe Kravitz, “Snow On The Beach” collaborator Lana Del Rey, and other pals. “Midnights is a collage of intensity, highs and lows and ebbs and flows. Life can be dark, starry, cloudy, terrifying, electrifying, hot, cold, romantic or lonely. Just like Midnights. Which is out now,” the blonde beauty concluded.