Britney Spears‘ ex-husband Kevin Federline criticized her parenting in a new interview, where he said their sons Sean, 16, and Jayden ,15, are choosing not to see her. The former back-up dancer, who was married to Britney from 2004 to 2006., didn’t hold back when he spoke to UK broadcaster ITV for an upcoming hour-long special about the 40-year-old pop star.  In an excerpt from the interview, published on Aug. 6 by the Daily Mail, Kevin said: “The boys have decided they are not seeing her right now. It’s been a few months since they’ve seen her. They made the decision not to go to her wedding,” he said of Sean and Jayden in reference to them skipping out on their mom’s recent marriage to 28-year-old actor Sam Asghari.

Britney was quick to fire back on Instagram, but behind the scenes the turmoil has her in a world of pain, and a source tells HollywoodLife EXCLUSIVELY that her husband of 2 months is stepping in to help her bounce back. “Britney is so hurt and in shock that Kevin would attack her like this after all that she has done to support him over the years. This has really knocked the wind out of her but luckily, she has the support of Sam because he’s completely got her back in all of this,” a source shares. 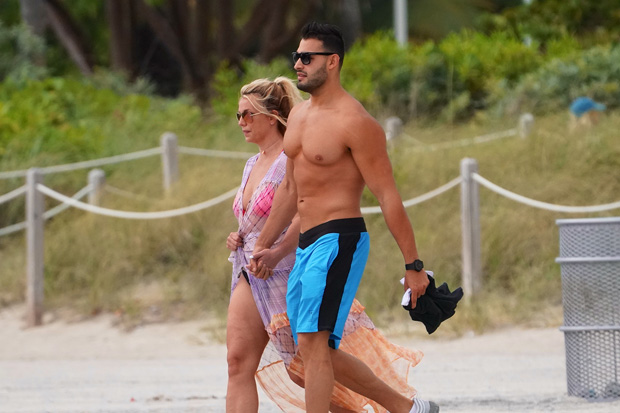 Sam, 28, who tied the knot with the ‘Toxic’ singer in a star-studded June 9 wedding didn’t hold back in his public response to Kevin’s cruel comments. He even told Britney’s ex, 44, to “keep my wife’s name out your mouth,” in a long Instagram rant defending the mom-of-two. In addition to publicly coming to her defense, the hunky personal trainer, turned actor, is working hard to lift Britney’s mood. “He’s doing everything he can to cheer her up and just help her get through this really tough situation,” adds the source. “As her husband he’s incensed that Kevin would deliberately try to tear her down and he’s vowed not to let that happen. His whole mission right now is to boost Britney back up and help her get through this.”

Not only is Sam giving Britney positive feedback — our source reveals that he’s also got her taking out her frustrations in their home gym! “Sam’s always been a positive person who looks on the bright side of things and this situation is no different. Sam has been an absolute rock for Britney and he will always be the most supportive husband he can be. He lets her vent and he’s standing up for her too but he’s also encouraging her to get her feelings out in the gym, that’s the way he handles life when the going gets tough and he’s got Britney doing the same.”

Kira Mengistu: 5 Things To Know About The 'Bachelor In Paradise' Contestant

In spite of Kevin’s assertion that Britney’s sons have been avoiding her, a source close to Britney previously told HollywoodLife that “much of” Kevin’s interview is “untrue” and “she’s seen boys recently.” In fact, Britney just bought a new $12 million home in the same ritzy Calabasas enclave where her sons live with Kevin, a move that was no accident. As previously reported, the loving mom specifically wanted a home where she could “open the doors” to her teenage boys.