The countdown is on until the Royalty Brown world tour. The 8-year-old daughter of Chris Brown took another step towards pop stardom on Thursday (July 28) by sharing a video of her mimicking her father’s dance moves. As Chris, 33, and his crew dance along to “Call Me Every Day,” Breezy’s collab with Wizkid, Royalty did her best to keep up – and she did a pretty good job! In fact, Chris himself gave his seal of approval in the comments section. Along with a string of “kiss” emojis,” Chris wrote, “Get it, baby!” 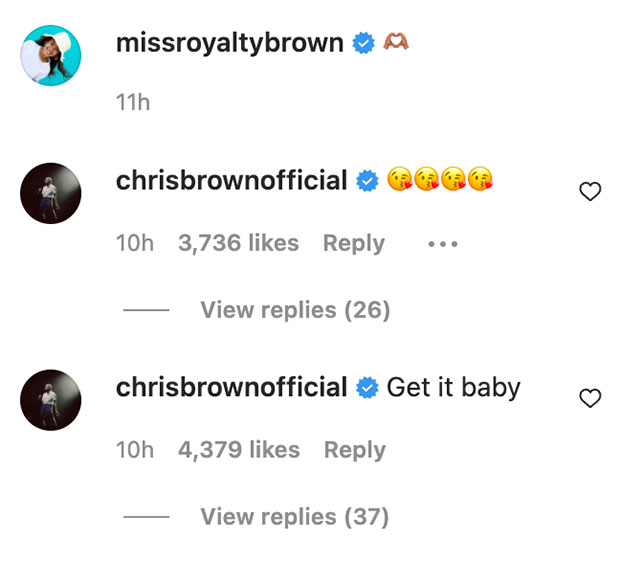 The rest of the comments were just as supportive for Royalty. “That’s RIGHT RORO show US how you do the challenge. Royalty gave facial expressions and a dance routine. OK miss BROWN,” wrote one fan. “She definitely got her moves from her daddy!” added another. “Ayyye!! Go Ro Ro!” “This is so adorable get it boo.” “AYEE GET IT RORO.” “A whole star [star emoji] go RoRo you’re the bomb, baby girl!”

Royalty celebrated her eighth birthday in May, an event that saw Chris reunite with her mother, Nia Guzman. In a video posted to their Instagram stories, Chris woke up his daughter by jumping in the bed with Royalty as Nia recorded the whole interaction. Royalty – who wasn’t that excited at being woken up – looked around while Nia brought in some cupcakes with red frosting and birthday candles. In a second story, Royalty used a calculator to count the cash her parents had given her. “Okay, birthday girl!” said Nia.

Chris has a whole dance troupe’s worth of kids now, having welcomed daughter Lovely with Diamond Brown and 2-year-old son Aeko with Ammika Harris. In June, Chris shared a video of him holding his then 5-month-old daughter, Lovely, while standing out in the night air. Lovely was fascinated with Chris’s phone, which amused him. “Yeah!” he said happily while looking at his new baby. “One-two, yup!”

Chris and Diamond – who share the last name but aren’t married – welcomed their daughter at the start of 2021, but he didn’t confirm the paternity until April. He shared a photo of the young girl, along with a message  — “three months” – to his Instagram Story.