Mick Jagger put the world on high alert on June 13. “I have unfortunately just tested positive for COVID,” Mick, 78, posted to Instagram. The Rolling Stones frontman was apologetic in his message since it meant his band had to reschedule a performance, but Mick’s son, Lucas Jagger, was more concerned about his father’s health. “Dadda,” Lucas, 23, commented on the post while including a heart emoji and a worried face. The comment got over a thousand likes, with many joining in to reassure Lucas that his father would be okay.

“Wishing your dad and you all well. I’m sure he’ll recover soon!” wrote one. Others reassured Lucas that it’d likely be a mild case since Mick has said in interviews that he’s vaccinated against the coronavirus. “He will be fine,” said one fan. “Hope for him and the family he will be ok! [love] and all the best,” added another fan, who peppered their comment with four-leaf clover emojis for luck. “He will be ok, my darling!! We are here for him,” wrote one Rolling Stones fan.

“It’s not as if [vaccines] are a new thing,” Mick told Rolling Stone in 2021 when discussing “Eazy Sleazy,” a track that mocks anti-vaxxers and conspiracy theorists. “When I was a child, which was a really long time ago, people would die from polio. They would just not be there the next day. And that’s been eradicated through vaccines. These poor children were either dead or [disabled], and I had lots of friends like that. Would you rather have a vaccine if you had a child, or would you rather their legs not work?”

Mick Jagger -- Pics Of The Singer 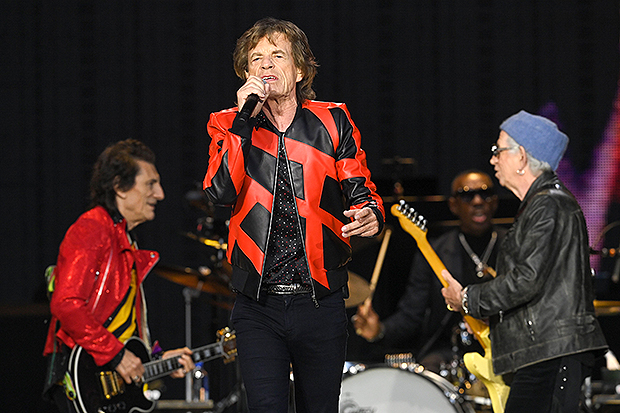 “Each country’s different, but I see the amount of vaccines [increasing] and having to go through all these lockdowns and changing our minds and stop-and-start,” the rock legend told RS. “But there seems to be, now, a light at the end of the tunnel in a lot of countries. I could see that light, so I thought I’d write a song about all the things that you’ve experienced in lockdown, and now hopefully, this is going to be the beginning of a bit more freedom.”

Waiting for Mick at the end of his COVID diagnosis will be his son. Lucas is the only child of Mick and Luciana Gimenez Morad, who had a widely-publicized eight-month affair while Mick was married to Jerry Hall. Lucas isn’t Mick’s oldest child – that would be Karis Jagger, Mick’s 51-year-old daughter with Marsha Hunt – nor is he the youngest (that would be 5-year-old Deveraux Jagger). Lucas is one of Mick’s closest kids, as the twenty-something model has often shared photos of him spending time with his dad, including pictures from recent Rolling Stones shows.