After holding “a funeral for my pop music” career, Demi Lovato unleashed their new rock-inspired sound on Friday (June 9) with “Skin Of My Teeth.” After teasing the transition towards their pop-punk and rock roots, Demi dropped the new song off their upcoming album, HOLY FVCK, a sentiment many might say after seeing the new video, which features them in a bathtub and then rocking out in a leather outfit.

“Skin of My Teeth” is about Demi’s battle with addiction and recovery following a near-fatal overdose in 2018. “I’m alive by the skin of my teeth,” they ing in the chorus. “I survived but it got harder to breathe.” At one point, they also flat-out admit, “I can’t believe I’m not dead.”

Demi first signaled their turn from pop to rock in a Jan. 20 Instagram post. “A funeral for my pop music,” they captioned the shot of her sitting alongside music executives from Island Records and their manager, Scooter Braun. They also shared an Instagram Story of the execs telling Demi that they can “put out whatever music you want, whenever you want to. Break the rules.” So, Demi shared two snippets of a rock song, which included them singing along to heavy guitar riffs. “Yeah, you’re pushing me to the edge/ Prod me, lie to me, ungodly things have been sent/ Here are your tickets to the freak show baby, sci-fi, watch the freak go crazy.” (h/t Billboard)

“I would say it’s a new era. I’m ever-evolving, ever-changing,” Demi told Rolling Stone about the “funeral” and this new direction. “I’d like to put the rest of my music behind me and start fresh in this new era for this next album — but I do that every album cycle. It honestly wasn’t a funeral. It was a label meeting, and we just all happened to be in black, and I was like, ‘Wow, this is like a funeral for my pop music.’ There wasn’t an actual funeral.”

“There’s a bit of… and when I say heaviness, I don’t mean lyrically, but heaviness as in some of the sound that I haven’t done before, which is exciting. It’s a new era reminiscent of my first era,” they added.

“The process of making this album has been the most fulfilling yet, and I’m grateful to my fans and collaborators for being on this journey with me,” Demi said when announcing HOLY FVCK. “Never have I been more sure of myself and my music, and this record speaks that for itself. To my Lovatics who have been rocking out with me since the beginning and those who are just now coming along for the ride, thank you. This record is for you.” 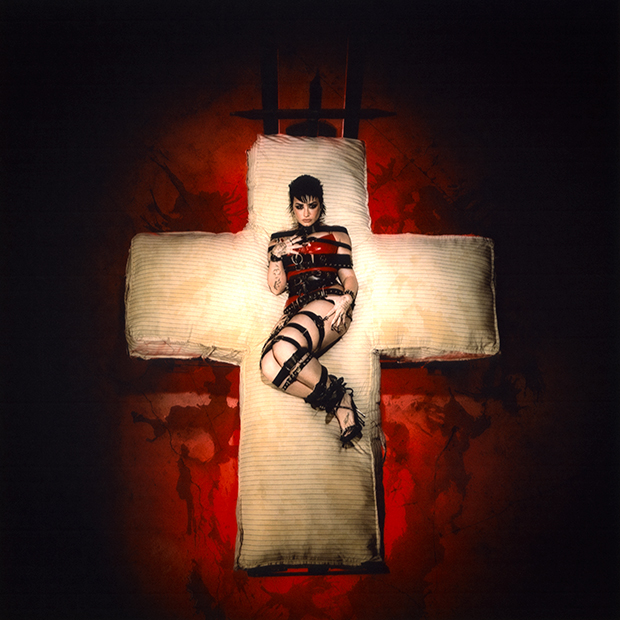 Demi hasn’t been shy about their love of metal and rock. As We Are The Pit pointed out, as far back as 2008, Demi listed Lamb of God, Job For A Cowboy, and black metal acts Abigail Williams and Dimmu Borgir as some of their favorite bands. In 2019, they posted footage of them rocking out to He Is Legend, Bring Me The Horizon, Maylene and the Sons of Disaster, and The Devil Wears Prada.

“It’s so completely different from anything else,” Lovato said in that 2008 interview with MTV. “You’ve got vocals that I can’t do, the double bass drums, the incredible guitar solos … every part of the band does more difficult stuff than your average rock band does. I listen to these bands, and I wish I could do all of that, but I can’t.”