Erica Herman wouldn’t have missed this for the world. Tiger Woods’ girlfriend was among his family, friends, and fans as he was inducted into the World Golf Hall of Fame on Wednesday (Mar. 9) at the PGA Tour Headquarters in Ponte Verda Beach, Florida. Erica, 38, watched as Tiger, 46, was inducted by his 14-year-old daughter, Sam Woods. Erica dressed in red, an obvious ode to Tiger’s now-iconic red Nike polo shirt, and sad alongside Tiger, Sam, Tiger’s son Charlie Woods, 13, and Tiger’s mother, Kultida Woods.

It was an emotional night for Tiger. He was elected into the Hall of Fame in 2020 and was to be inducted the following year. However, the COVID-19 pandemic delayed the ceremony until 2022. During Sam’s induction speech, Tiger wept as his daughter told him, “Dad, I inducted you into the Dad Hall of Fame a long time ago.” She also relayed a story about her birth, per the New York Post. Though Sam joked about how Tiger “won the greatest gift of all” the day she was born, she poignantly spoke about how he had fought his way back from his devastating February 2021 car crash.

“We didn’t know if you’d come home with two legs or not,” she said, per the Post. “Now, not only are you about to be inducted into the Hall of Fame, but you’re standing here on your own two feet. This is why you deserve this, because you’re a fighter.”

With tears in his eyes, Tiger cracked a joke when he got up on the podium to give his speech. “Crap,” a watery-eyed Woods said, trying to lighten the moment. “I just lost a bet to [Steve] Stricker that I wouldn’t cry. Thank you, Sam.” 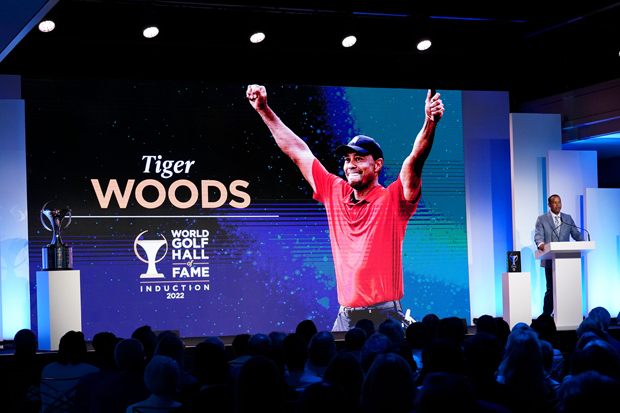 When accepting his induction, Tiger paid tribute to his late father, Earl, and his mother, saying that they “instilled in me this work ethic to fight for what I believe in, chase after my dreams, nothing’s ever going to be given to you, everything’s going to be earned,” per ESPN. “If you don’t go out there and put in the work, you don’t go out and put in the effort, one, you’re not going to get the results, but two, and more importantly, you don’t deserve it. You need to earn it.”

“I know that golf is an individual sport,” Woods added. “We do things on our own a lot for hours on end, but in my case, I didn’t get here alone. I had unbelievable parents, mentors, friends who allowed me and supported me in the toughest times, the darkest of times, and celebrated the highest of times.”