While heading to lunch with a friend on Monday (Mar. 7), Sharna Burgess realized that “so much has happened since the last time we did a Q&A,” and the Dancing With the Stars pro opened up her Instagram Story to her fans. It didn’t take long for things to get shady with Brian Austin Green’s pregnant girlfriend, with one fan asking, “How do you deal with following in Megan Fox’s footsteps?” Sharna, 36, shut things down right away. “Normally, I wouldn’t answer these types of questions, but I think many women struggle with comparing themselves to a partners x (sic). Or to other women in general,” she wrote.

“That’s because society has made out that we are a bitchy and competitive gender, that we can’t possibly be happy with who we are without wanting what ‘she’ (whoever that is to you) has,” continued Sharna. “We are measured by our looks and our weight more than we are weighed by anything else. So my answer to you is simple … I don’t. She is her own self and an amazing woman. As I am my own self and an amazing woman.” ‘

“This notion that you ‘follow in the footsteps’ of your partner’s [ex] is dangerous,” wrote Sharna. “If you live by that idea, then it will lead you to the same result: the relationship ending. You are a unique, one-of-a-kind woman. Don’t follow in anyone’s footsteps; make your own path. Create the path YOU Want.” Sharna also encouraged her followers to remember that women “are incredible, powerful creatures. WE do not need to tear down others to make ourselves feel stronger.”

“But helping each other, respecting each other, and lifting each other up is what truly makes us unstoppable. A community of women around you is a gift,” added Sharna. She turned her focus to the Anon who asked her the question with her last line. “I hope that is something you get to realize with time. [Heart emoji.]” 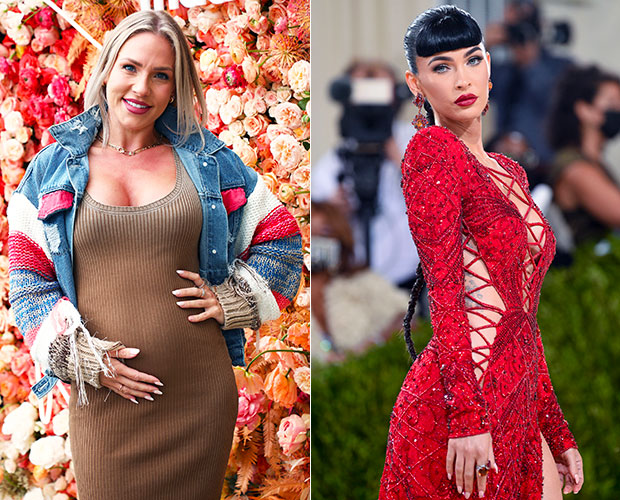 The rest of the Q&A was less dramatic. Sharna said she could exercise “for the most part” while pregnant. When asked when she’s due with Brian and her first son, she said, “Jul. 4!! I mean, the whole Nation shall celebrate the birth of my first child.” She also revealed that she and Brian, 48, were using birth control, so the pregnancy was “definitely Divine timing with this one.” She also said that Brian and Megan’s kids —Journey River, 5, Bodhi Ransom, 7, and 9-year-old Noah Shannon – are excited for the new baby. “Honestly, writing this response made me emotional,” wrote Sharna. “It’s really beautiful how connected to him they are already.”