Kim Kardashian, 41, is getting what she wants regarding the latest development in her divorce proceedings from Kanye West. The Keeping Up with the Kardashians star was on a video call on Wednesday’s (March 2) court hearing while Ye was absent, according to TMZ. The judge granted Kim’s request to end her marriage – so she is no longer Kim Kardashian-West. Her name is now simply “Kim Kardashian” yet again. HollywoodLife confirmed the results of the court hearing with the doc seen below.

Ye’s lawyer didn’t object to restoring Kim’s status, per TMZ. The attorney did say that Ye had three conditions to the change. The first was that “any right to get reimbursement of money that’s supposed to be divided up will be preserved in case either of them dies,” which the judge allowed. However, the judge shot down the other two requests: that Kim would not transfer any assets she had in a trust and that if she were to remarry, she would waive the “Marital privilege.” TMZ notes that privilege means “a new spouse would not have to testify about communications he had with [Kim].” 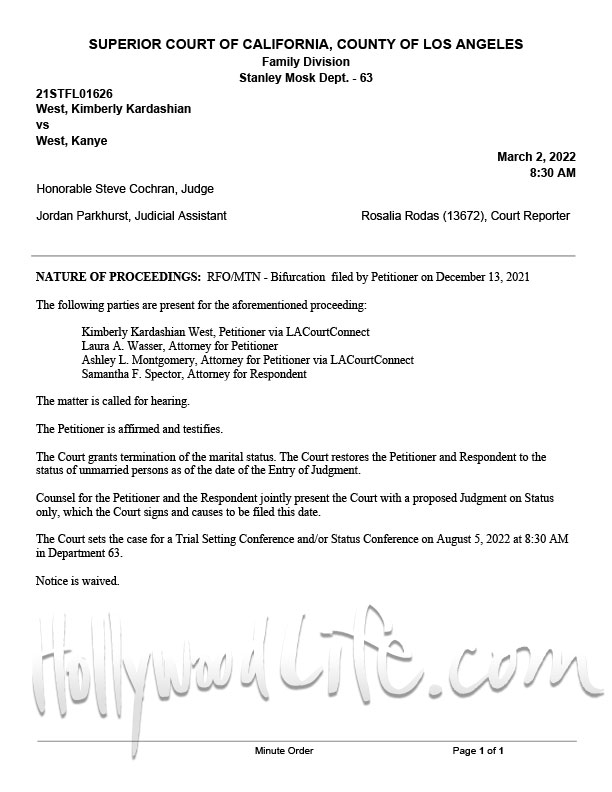 The status ruling for Kim comes after court documents stated that Kim has been trying to move on from her marriage, but Kanye has not. The beauty’s request to be legally single was rejected by the “Jesus Walks” creator on Feb. 18, and a source EXCLUSIVELY told HollywoodLife that she’s “not at all happy with Kanye’s attempts to delay their divorce. She wants to dissolve this marriage as quickly as possible!”

The insider also told us that although Kim is frustrated with the attempts to stop the divorce, she “isn’t all that surprised that Kanye denied her request. He’s made every step of this process as difficult for her as possible, and clearly, he has every intention of continuing to do so. Kim needs Kanye to quit it and move on with his life. All that she cares about at this point is that he be a father to their kids.”

Kim and Kanye share four children together, including daughters North, 8, and Chicago, 4, and sons Saint, 6, and Psalm, 2, and they have been co-parenting the brood ever since their split. Still, Kanye has publicly expressed disapproval about some of the ways Kim has been choosing to parent on her own, including how she let their oldest daughter North on TikTok, and also admitted he wants Kim back through a series of now-deleted social media posts.

Kim first filed for divorce from Kanye in Feb. 2021, and the two seemed friendly in the first few months after the filing when they were spotted taking their kids on outings together. The doting mom also showed up at one of Kanye’s music release parties, but by the end of that year, their connection seemed to dwindle. Kim also started dating Pete Davidson, whom Kanye has also publicly thrown shade at, around Oct. 2021.