Bella Hadid and Gigi Hadid took New York Fashion Week by storm when they helped modeled Michael Kors’ Fall/Winter 2022 collection on Feb. 15. The ladies were just two of the models to take the runway in some of the designer’s stunning new looks. Gigi, who gave birth to her first child in Sept. 2020, looked fierce while wearing a one-sleeved, sparkly black gown. The dress had a thigh-high slit up one leg, allowing her to show off her strappy black heels. Her look was complete with a sleek, low ponytail and dark eye liner.

Meanwhile, Bella rocked a similar sparkly black look. Her dress had a turtleneck-style neckline and long sleeves, as well as a side cutout to reveal some skin. There was also a thigh-high slit up one leg, and she wore the same shoes as Gigi. The hair and makeup look was kept constant for the show, with the models all wearing sleek hairstyles and dark eye makeup.

For another one of her looks at the show, Bella wore a plunging white dress. The outfit was held together with a thick, nude-colored belt around her midsection. The gown had a slit right up the middle, allowing Bella to show off the tan boots she was wearing underneath, which came up to just under her knee. She carried a brown purse to match the belt and boots, as well.

New York Fashion Week 2022: Photos Of Celebrities At The Shows 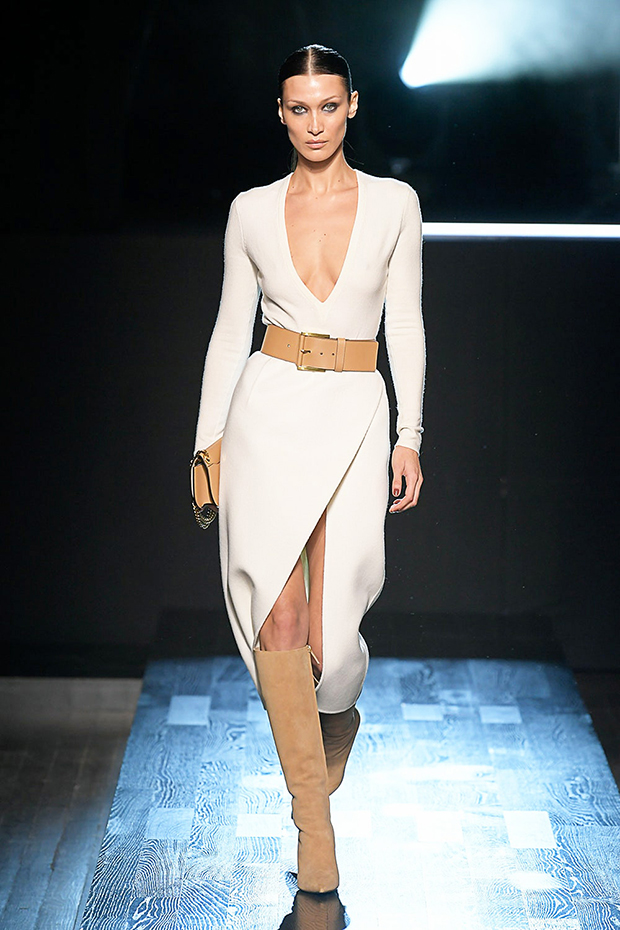 Bella and Gigi have both been modeling since they were teenagers, and they certainly show no signs of slowing down! Gigi was walking on the runway while she was pregnant with her baby at the beginning of 2020, although the public didn’t know about her pregnancy at the time. She returned to the runway just five months after giving birth when she walked at Milan Fashion Week in March 2021.

New York Fashion week wraps up on Feb. 16. However, Paris Fashion Week will kick off at the very end of the month and last through mid-March, so hopefully we’ll see these ladies pop up again soon!