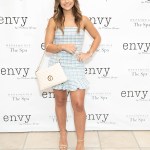 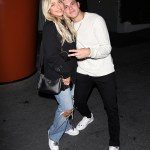 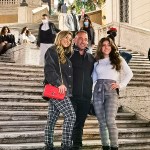 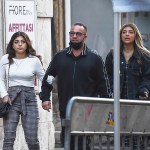 The ‘RHONJ’ daughter had some fun in the sun as she sported a pink bikini and wet hair during her Bahamas trip.

Gia Giudice, 20, has certainly grown up a lot since she first appeared on Real Housewives of New Jersey with her mother Teresa Giudice. She recently dazzled her fans with sexy pictures from her trip to the Bahamas on Instagram. As she sat in front of a beautiful beach backdrop, Gia rocked a pink patterned bikini and wet hair, proving she had just hit the waves.

Even though the main focus of the post was Gia’s stunning beach look, she wanted to draw her fans’ attention to the adorable sea life around her. “Look at the little hermit crab,” Gia wrote in the post’s caption, and surely enough, the third photo of her post featured an impressive and adorable shot of a tiny hermit crab. Both Gia and the hermit crab received plenty of love in the comments section. Her father, Joe Giudice, wrote, “love you” while her sister Milania Giudice called her “beautiful” and cousin Antonia Gorga dubbed her as “pretty.”

The Bahamas has become a popular vacation spot for Gia, especially since her dad moved there for a celebrity wrestling gig. She visited Joe there in November 2021. The two seemed to have a great time together and Gia uploaded pictures of her attending a fancy dinner with her dad as she wore a figure-hugging cocktail dress and hanging by the pool as she wore a bright green bikini.

His ex-wife and Gia’s mother, Teresa, supports Joe in his recent endeavors and move to the Bahamas. “A whole bunch of us are gonna go,” Teresa told Extra TV in February. “I know Dolores [Catania] wants to go. Jennifer [Aydin] wants to go. If I’m not working, I’m definitely gonna be there.” Joe was previously living in Italy after he was deported from America following his incarceration.

Joe and Teresa split up after the two served jail time for mail, wire, and bankruptcy fraud. Since then, the two have moved on to other relationships. Teresa started dating Luis Ruelas in July 2020 and he popped the question to her in October 2021. Joe briefly dated Daniela Fittipaldi, but the two have since split. Even if it means that their parents are no longer together, Gia Giudice and her sisters have been very supportive of their parents moving on to pursue new relationships and find happiness.