Scott Disick reunited with Kourtney Kardashian and her fiancé Travis Barker at a recent family soirée, but it apparently did not play out like a dramatic episode of reality TV. Sources have revealed exclusively to HollywoodLife that Scott, 38, attended Kris Jenner’s 66th birthday party on Friday, Nov. 5 — and while Kourtney, 42, and Travis, 45, were naturally in attendance, there was no “unnecessary drama” as Hulu camera crew filmed for the family’s upcoming show.

“Scott was there at the same time as Kourtney and Travis at Kris Jenner’s birthday party, but he did not stay for long after they arrived,” one source shared. “Hulu cameras were filming the whole thing and this will absolutely be used on the show. Regardless of how they feel about each other, Kourtney and Scott know that they have a job to do at the end of the day.” The source maintained they’ve had “worse falling outs,” stating that Kourtney harbors no “ill feelings” towards the father of her children.

The media personality agreed to attend the party because Kris offered him a spot on the upcoming Hulu series, the source explained. “She is an insanely smart business woman and knows that Scott brings the drama that they need.” the source added. “He knows that he is going to have to be a part of their lives and that he has to get over his feelings about this for the sake of their kids.”

Kourtney Kardashian & Scott Disick: Photos Of The Exes Together 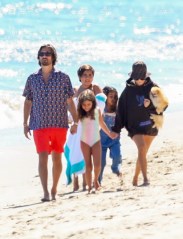 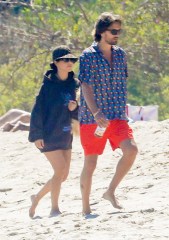 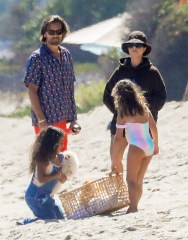 Scott and Kourtney share children Mason, 11, Penelope, 9, and Reign, 6, together. A second source said that Scott was “grateful” that he had Kourtney’s sister Khloé “to lean on for support” at the party. (He even shared an Instagram Story with the Good American founder, 37, at the party, calling her “gorg.”) “Scott and Khloé have always been close, and they will continue to be regardless of Kourtney’s relationship status with Travis,” the source said. “Khloé looks at Scott as family because he is. She absolutely adores him.”

While he didn’t “stay too long” at the party because it was a “bit awkward,” the source said that Scott “handled himself like a perfect gentleman because he doesn’t have the energy left to cause any unnecessary drama, particularly with the mother of his children.” It looks like Scott might appear in the Hulu series recurrently, too. After the birthday party, he and Kris were spotted filming together in Woodland Hills on Nov. 8. It’ll be an interesting series, indeed.