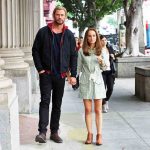 ‘Thor: Love & Thunder’ stars Chris Hemsworth and Natalie Portman were spotted getting close on the set of the new film, exciting fans for the story to come.

Chris Hemsworth, 38, and Natalie Portman, 40, got close and personal on the set of the latest Thor installment, Thor: Love & Thunder. In the recently leaked photos, the on-screen couple are seen holding hands as they settled into their respective roles as Thor and Jane Foster. The film, directed by Taika Watiti, 46, is a direct sequel to Thor, Thor: The Dark World, and Thor: Ragnarok. Taika co-wrote the script with Jennifer Kaytin Robinson and will reprise his role as Korg.

The latest Thor installment will be the sixth released within Phase Four and the 29th film overall in the Marvel Cinematic Universe, as Chris returns for his fourth Thor movie. The flick will have Natalie returning as Jane Foster for the first time since Thor: The Dark World in 2013. This time around, Jane has a much larger role, becoming Mighty Thor and wielding Mjolnir, the legendary hammer. When Natalie was first announced to make her return at San Diego Comic-Con in 2019, Taika revealed some details: “That storyline is  is full emotion, love and thunder, and introduces for the first time female Thor,” the director said at the time.

Natalie also confirmed to Yahoo! in 2020 that Jane’s arc in the upcoming film is inspired by The Mighty Thor comic series, and that she was “starting to train” and “get muscles” to prepare for the superhero role. “If there can be all these female superheroes, the more of them they are, the better it is,” she told the outlet. “I’m trying to think — it’s based on the graphic novel of the Mighty Thor. She’s going through cancer treatment and is a superhero on the side.” 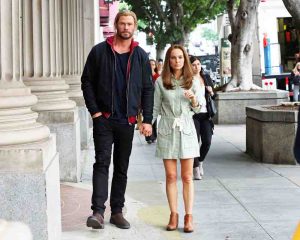 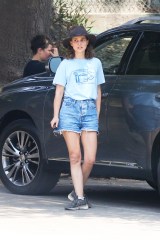 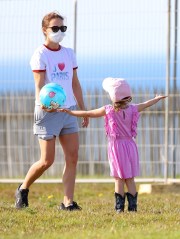 Also returning to the cast is Tessa Thompson as Valkryie, who is now the leader of New Asgard. Other stars reportedly returning include Jaimie Alexander as Sif and Jeff Goldblum as Grandmaster. Thor: Love & Thunder will also feature appearances by several Guardians of the Galaxy, including Chris Pratt as Peter Quill/Star-Lord, Karen Gillan as Nebula, Pom Klementieff as Mantis, Dave Bautista as Drax, Sean Gunn as Kraglin, and Vin Diesel as Groot.

Moreover, Christian Bale has joined the cast as the villain Gorr the God Butcher while Russell Crowe is set to make a cameo as Zeus. Matt Damon, Sam Neill, and Luke Hemsworth will reprise their roles as Asgardian actors Loki, Odin, and Thor. Melissa McCarthy will also return as an actress playing Hela.