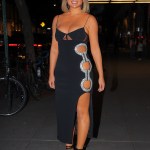 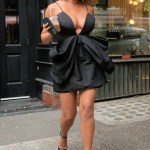 Hot mama! Chrissy Teigen turned up the heat on ‘The Tonight Show with Jimmy Fallon’ in a sexy black dress with cutouts on the side.

Chrissy Teigen’s style was totally on point during her appearance on The Tonight Show with Jimmy Fallon on October 28. The cookbook author walked out in a tight black dress with a thigh-high slit and cutouts on the side. The circular cutouts on the left side had silver sequins surrounding them.

As soon as she walked out, Chrissy started dancing along with Jimmy Fallon. He helped her onto the stage before they sat down to chat. Chrissy’s bob was sleek and straight for her Tonight Show appearance. At the beginning of her New York City press tour, Chrissy had extensions in to have longer locks.

Chrissy was on the show to promote her new cookbook, Cravings: All Together: Recipes To Love. Jimmy noted that “food is always there for us.” Chrissy added, “It’s the one constant.” She made Jimmy cringe when she said she asks for extra mayo at Subway. 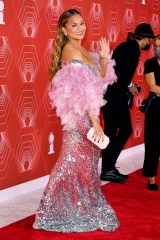 Chrissy has been a fan of the little black dress while in New York City. While heading to a taping Watch What Happens Live, Chrissy rocked a little black dress with a plunging neckline. The dress featured a big bow in the front as well. She wore a pair of simple black heels to complete her sexy look.

Just weeks before her New York City trip, Chrissy paid tribute to her late son, Jack, in an emotional Instagram post. Jack died in September 2020 after Chrissy suffered a pregnancy loss when she was 20 weeks along.

“And to the son we almost had. a year ago you gave me the greatest pain I could ever imagine to show me I could survive anything, even if I didn’t want to,” she wrote. “I didn’t get to take care of you but you came and went to get me to love myself and take care of myself because our bodies are precious and life is a miracle. they told me it would get easier but yeah, that hasn’t started yet. mom and dad love you forever.”