Travis Scott took Stormi Webster out for a family fun day at the local pumpkin patch just days ahead of Halloween.

Travis Scott and his daughter Stormi Webster, 3, enjoyed a day at the pumpkin patch ahead of Halloween on October 20. The rapper, 30, took to his Instagram Stories on Oct. 20 and shared the was the picture perfect dad as he doted on the little girl he shares with Kylie Jenner, 24.

The father-daughter duo looked precious while taking in the festive sights. Travis and Stormi coordinated their looks in matching grey sweatshirt hoodies. The cute tot wore bright orange cargo pants and wore her hair in adorable pigtail braids while clutching onto a doll. Travis wore a black baseball cap and army green pants while helping his daughter look at the corn stalks.

Meanwhile, Kylie may be expecting her second child with the “Sicko Mode” hit-maker, but she covered up her baby bump when she stepped out with her mini-me daughter and her niece True Thompson, 3, on Oct. 9.

The trio visited a pumpkin patch at Underwood Family Farms and Kylie was seen rocking a floor length grey coat. She paired the structured duster with a grey mock-neck top and matching grey leggings. Her raven tresses were worn in a long sleek style and parted down the middle, as she enjoyed the fall fun in the San Fernando Valley. 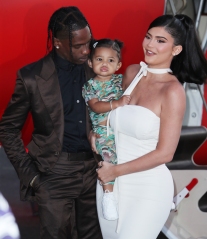 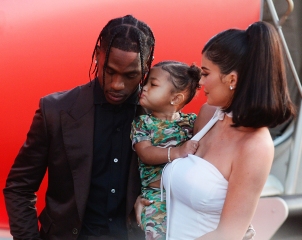 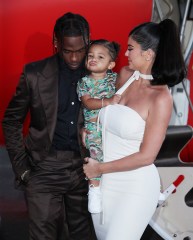 The family fun holiday comes after Kylie and Travis made headlines on Sept. 7 when they announced they were expecting their second child together. The Kylie Cosmetics mogul confirmed the reports that she and the rapper are expecting again by debuting her baby bump in a sweet new Instagram video.
Rumors began swirling that Kylie is pregnant on Aug. 20, but the reality star did not confirm that news at that time. She still hasn’t revealed the gender of her second baby, but fans believe it’s a boy since Kylie shared an Instagram post of Stormi on Aug. 24 that said “my favorite girl” alongside a blue-heart emoji. She also zoomed in on Stormi’s blue sneakers in the snapshots, further convincing fans of their theory.