When Kourtney Kardashian posted about her engagement to Travis Barker on Instagram, she was inundated with sweet messages in the comments section. Even fellow celebrities were getting in on the action, as they shared their congratulatory tributes to the newly-engaged couple. Kourt’s sisters, Kim Kardashian and Khloe Kardashian, both commented with red heart emojis, while Kim also included a series of diamond ring emojis. In addition, Kim posted a video of Kourtney and Travis on her own page with the caption, “KRAVIS FOREVER.” 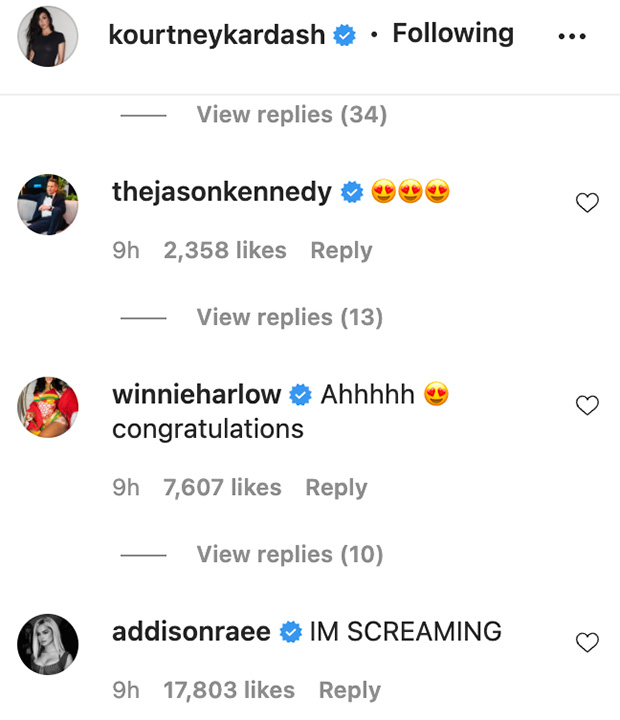 Other celebrities who sent love to Kourt and Travis included Winnie Harlow, who wrote “Ahhhh congratulations” with a heart-eye emoji, as well as Addison Rae, who gushed, “I’M SCREAMING.” Christine Quinn from Selling Sunset wrote, “Omggg I’m going to cry I’m so happy,” and Brielle Biermann commented with several heart-eye emoijs. Even longtime Kardashian family friend, Paris Hilton, jumped in, writing, “Congratulations! You two are so cute together!” 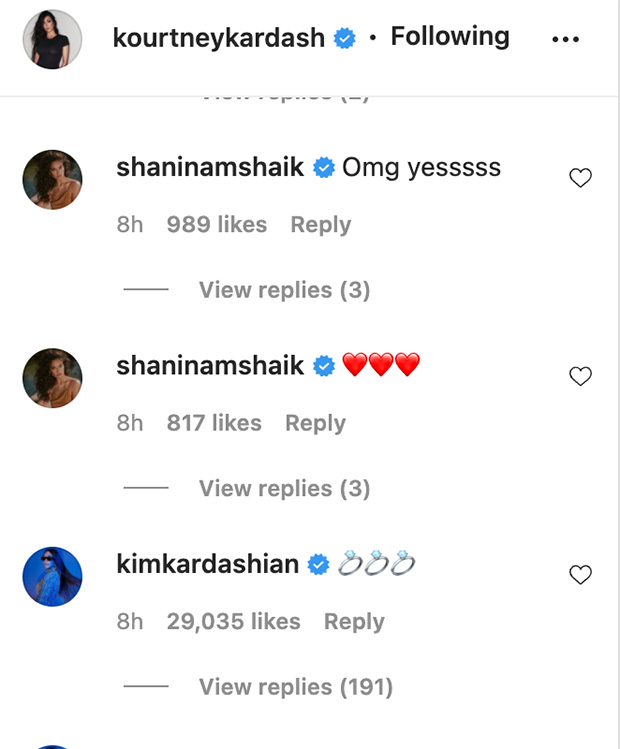 Travis proposed to Kourtney on the beach in Montecito on Oct. 17. Afterward, family and friends gathered together for a celebratory dinner. The rocker’s kids, Landon Barker and Alabama Barker, were both in attendance, and took to Instagram to send their love to the future bride and groom. “So happy for you guys, I love you both!!” Alabama wrote, alongside a photo of Kourt and Travis. Landon wrote, “Congratulations @KourtneyKardash and @TravisBarker I’m so happy for you guys love you guys so much.”

Of course thousands of fans also took to social media to comment on the engagement, as well. While many of them were simply sending their love to Kourt and Travis, a lot of the chatter was about how Kourtney’s ex, Scott Disick, would react to the engagement news. After all, he has three kids with Kourtney and was with her for ten years, but she was always hesitant about marriage during their relationship.

Plus, Scott’s true feelings about Kourtney and Travis’s relationship were exposed earlier this year when another one of the reality star’s exes, Younes Bendjima, released DMs that he received from Scott on Instagram. In the messages, Scott complained about Kourtney and Travis packing on the PDA on a boat in Italy. Scott never publicly addressed the DM scandal himself, but the message was loud and clear!