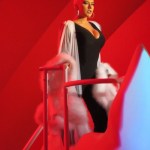 Christina Aguilera, 40, is the queen of glam and she proved that with her latest look. The singer posted a photo of her behind-the-scenes while getting glam and her platinum blonde hair was down in voluminous, super messy waves. Her curls gave us serious ’90s vibes as she looked sultry posing for the camera.

Her hair was done by hairstylist, Jesus Guerrero, while her makeup, which featured a glossy pink lip and thick black cat-eye liner was done by makeup artist, Etienne Ortega. Christina has been on a roll lately with ’90s hair and just the other day she rocked yet another iconic look.

She posted photos of herself rocking a low-cut scoop neck red sequin dress with her hair pulled back into a half-up half-down style. The top of her head was slicked back while the rest was blown out with super volume into tight crimps. Crimped hair was the hottest hairstyle back then and we love that Christina brought it back.

If there’s one thing for sure about Christina, it is that she is never afraid to try a new hairstyle and whatever look she ends up trying, she always manages to pull it off. Aside from crimps and curls, she recently rocked a sleek ponytail.

She performed on a new Disney special, ‘The Most Magical Story On Earth: 50 Years of Walt Disney World,’ when she looked like a real-life princess in a high, sleek and straight ponytail with a tiara. She topped her look off with an off-the-shoulder ruffled white gown and captioned the photo, “Forever a Disney girl, always a Disney princess… It was a full circle experience being back to my old stomping grounds at @WaltDisneyWorld. It was a dream I could have only imagined as a child working on The Mickey Mouse Club. Disney’s always where the magic begins…”