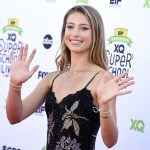 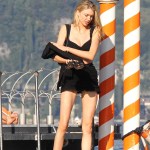 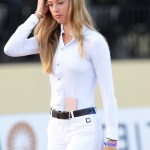 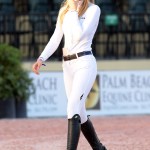 Steve Jobs’ daughter Eve has made her Paris Fashion Week debut, walking the red carpet in the Coperni show. See the pics!

Eve Jobs, 23, may be an accomplished equestrian, but she’s also adding supermodel to her resume! The daughter of the late Steve Jobs was photographed on the catwalk during Paris Fashion Week, making her runway debut in the Coperni. She stunned in a neon green mock turtleneck tee, which was paired with a dark blue mini skirt, platform sandals and orange reflective sunglasses with a chunky white frame.

The blonde beauty, who was recently spotted shopping in Rome with her mom Laurene Powell Jobs, 57, walked alongside A-listers like Gigi Hadid, and Paloma Elsesser. The show marked the introduction of the brand’s new “Origami” handbag, which was inspired by the iPhone Photos app icon. “I can’t put into words how extraordinary this collection is. It was an honor to be apart of the vision @coperni,” Eve wrote on Instagram, tagging designers, Arnaud Vaillant and Sébastien Meyer.

Most recently, Eve stunned on a rare outing in Europe, shopping at Dolce & Gabbana on September 17 with Laurene. The mother-daughter duo explored Rome’s Spanish Steps neighborhood, and did some window shopping while wearing protective face masks. Laurene, who was married to the Apple co-founder for 20 years before he died in 2011, is worth an estimated $21 billion after inheriting his fortune. 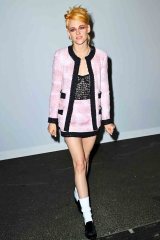 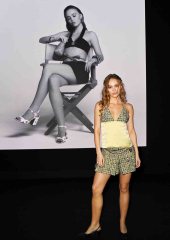 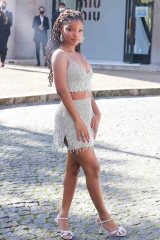 Laurene rocked a black jumpsuit which she paired with a mesh undershirt featuring a geometric pattern. She styled her blonde tresses in loose waves as she accessorized with a long gold necklace and black handbag. Eve looked equally chic in a cream crop top with high waisted jeans which she paired with a baby blue belt. The duo were later seen dining with friends at Nino’s restaurant.

Laurene and Eve were in Italy for the Longines Global Equestrian Championship, which took place on September 16 to 18. The 23-year0old competed in the first day of trials, and her proud mom watched from the sidelines. The Stanford University alum is an elite equestrian and  often shares social media photos from festivals and competitions that show her in action on her horse.