As ex Ben Affleck wraps up another whirlwind Europe trip with rekindled love J.Lo, Jennifer Garner was spotted heading to brunch with friends in California.

Jennifer Garner, 49, glowed as she headed to a brunch in Malibu, California. The 13 Going On 30 actress looked boho chic in a loose fitting brown patterned dress as she waved to cameras on Saturday, Sept. 11 before walking into exclusive restaurant Shutters on the Beach. She kept her brown hair down in a loose, natural wave for the morning outing, accessorizing with a flat gladiator inspired sandal, black leather clutch and black sunglasses.

The Charleston, West Virginia native appears to be in good spirits as her ex-husband Ben Affleck, also 49, enjoyed a whirlwind trip to Venice, Italy with Jennifer Lopez, 52. The rekindled couple — who were engaged from 2002 to 2004 before he was married to Garner — took the opportunity to go red carpet official at the premiere for his film The Last Duel. The Boston native stars in the flick as Count Pierre d’Alençon alongside BFF Matt Damon, 50. The Oscar winning duo also co-write the male perspectives in the flick. 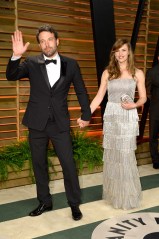 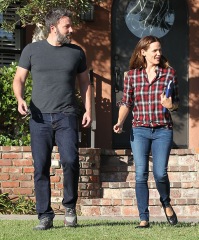 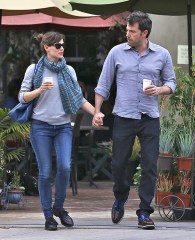 Fans and paparazzi went wild for Bennifer 2.0’s highly anticipated red carpet appearance, and the sexy couple did not disappoint! Jennifer looked sensational in a plunging white gown by Lebanese designer Georges Hobeika, which was adorned with crystals and featured a flirty high slit. Ben and J.Lo looked so in love as they shared a giggle before walking up and down the carpet, where they also shared a kiss. As HollywoodLife EXCLUSIVELY reported earlier today, wearing white was significant for J.Lo as it represented a “rebirth” for their romance.

Jennifer Garner, who was married to Ben from 2005 – 2018, was spotted keeping busy with the couple’s kids Seraphina, 12, and son Samuel, 9, while their dad was in Italy. The Alias alum could be seen teaching her two youngest kids how to pump gas at a Brentwood station on Sept. 10. While they may be a few years away from getting a drivers license in California, the two will certainly know their away around a gas pump when the time comes. Notably, Jen Garner and Ben also share daughter Violet, 15, who was not present.