To say that Soulja Boy was mad after DONDA dropped would be an understatement. Soon after Chris Brown called out Kanye West for allegedly cutting his verse from “New Again,” Soulja, 31, unloaded on Kanye, 44, for allegedly cutting him from the album. “[I don’t know] how to feel. Kanye sent me that song ‘Remote control,’ and I don’t hear my verse on it,” tweeted Soulja. “Hmm fuck that n—-.” He later tweeted, “Learn to be done. Not mad, not bothered, just done. Protect your energy at all costs. But, after sharing a video of his alleged verse, Soulja unloaded on Ye. 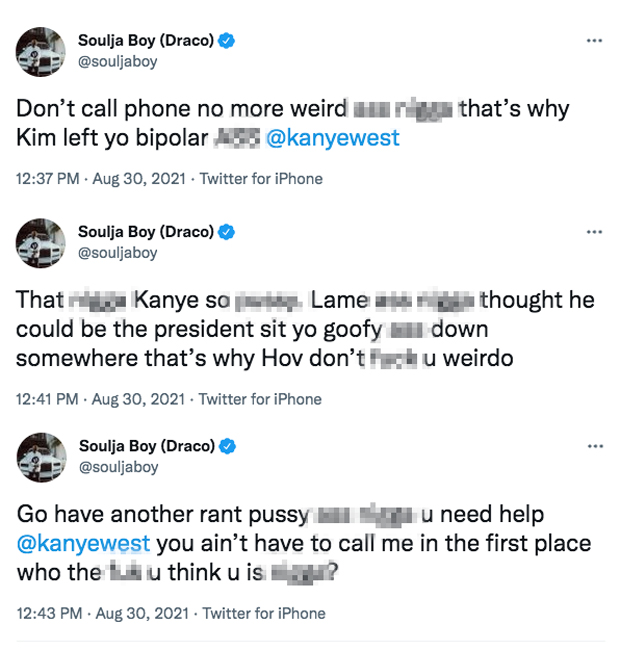 “Don’t call phone no more weird ass n—- that’s why Kim [Kardashian] left yo bipolar ASS,” tweeted Soulja. “That n—- Kanye so p-ssy. Lame ass n—- thought he could be the president. Sit yo goofy ass down somewhere that’s why Hov [Jay-Z] don’t f-ck [with] u weirdo,” he added, seemingly forgetting that Jay-Z had a verse on DONDA. From there, Soulja vented his frustrations, telling Kanye to “go have another rant,” that he “needs help,” and that he didn’t “have to call me in the first place. Who the f—k [do] you think [you are]?” From there, Soulja tweeted, “How [did you] get so lame?” to Kanye, before telling Kim, 40, to “call me.”

“He did this same shit on ‘Robocop,’” added Soulja, referencing the song from Kanye’s 2008 album, 808s & Heartbreak, “when [Kanye’s then-girlfriend] Amber Rose was in the studio years ago. I hate working with this dude. He needs help seriously.” When a fan remarked that Soulja “wanted to be on [808s] so bad, Soulja said, “I didn’t get AF about that weak ass album. He called me. I was making [Amber] clap.” Ultimately, Soulja said, “If he didn’t like the verse, he should [have] said that. Don’t text me acting like [you] f-ck with it then secretly take it off. What kind of sh-t is that? I was working on my album, too. I don’t got time for this sh-t.” During all of this, Soulja announced that his album, Swag 4, will drop on Friday (Sept. 3). 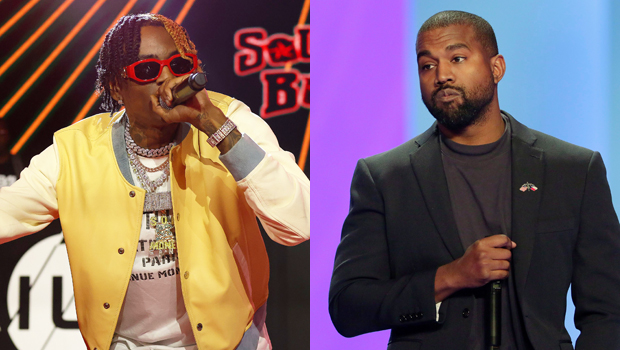 After DONDA hit streaming services on Aug. 29, Kanye posted a message to his Instagram, alleging that his label – Universal Music Group – released the album without his permission. Soulja Boy responded to that by calling it “cap” [a lie]. Chris Brow, 32, also blasted Kanye for being left off DONDA. He allegedly recorded a verse for “New Again,” but his vocals were only heard in the chorus. As for Kim, she probably won’t be calling Soulja soon. Kim wore a white Balenciaga wedding dress during Kanye’s DONDA listening party in Chicago, and a source told Hollywoodlife that Kim “wants to make things work, especially for the kids, and still [loves] Kanye.”