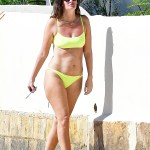 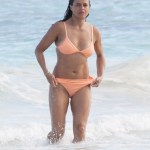 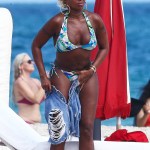 Miley Cyrus announced new tour dates in a new post, showing off the coolest back tattoo in a printed bikini.

Miley Cyrus is hitting the road! The singer, 28, announced a slew of new tour dates on social media on June 16, all while showing off her intricate, lower back tattoo (a tiger ensnared by a dragon) while donned in a printed bikini. Along with the announcement, Miley shared a throwback video that features Ariana Grande singing her praises, saying, “She’s an adult. She can do whatever the hell she wants. And she looks amazing,” among other comments interspersed with clips of Miley at public events. You love to see it, right?

“I don’t know what y’all wanna see more. My back tat or me in concert! Here ya go! Now there’s only one thing left to do!” Miley captioned the posts on Twitter and Instagram. She added of the archival Ariana clip, “P.S. swipe for MY opinion on YOUR opinion.”

The singer will begin her eight-day tour on July 4 at Resorts World Las Vegas in Nevada and wrap things up on October 8 at the Austin City Limits Festival in Texas. The tour will also span Illinois for Lollapooza, California for the BottleRock Festival, Wisconsin for Summerfest, and Georgia for the Music Midtown Festival.

The pic comes after Miley similarly shared a bikini selfie on Instagram last week to celebrate the start of Pride Month. The star, who has identified as pansexual, rocked a rainbow bikini and showed her support for the LGBTQ+ community.  “I’m an openly gender fluid person and I have always been honest about my sexuality,” she told Vogue in June 2018. “It’s been important to me not only to show pride for who I am, but to encourage my fans to always be true to who they are.”

It’s been a fruitful pandemic for the “Midnight Sky” singer. Miley released her seventh studio album Plastic Hearts last November, bringing in iconic collaborators like Stevie Nicks, Billy Idol, and Dua Lipa and receiving acclaim for her new work. She also appeared as a musical guest on the May 8 episode of Saturday Night Live with host Elon Musk. Here’s to 2021 being just as eventful –literally!