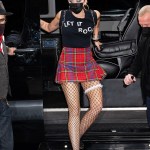 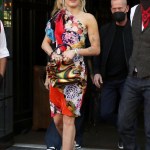 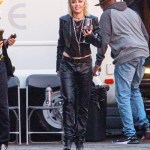 Miley Cyrus, who identifies as pansexual, took to Instagram to show her support for Pride month in a colorful swimsuit!

Miley Cyrus, 28, is showing her support for pride month! The Hannah Montana alum looked gorgeous as she posed in a rainbow colored bikini on a gray towel on Saturday, June 12. Still rocking her blonde mullet, she appeared to be fresh faced and makeup free as she enjoyed some time in the sun. She added plenty of “Pride” .gifs to the post, along with a tag for the Happy Hippie Foundation which she founded in 2014.

She followed the first post with second selfie-filmed video. Holding the phone up to give her 134 million followers a look at her swimsuit, she included a Sponge Bob .gif, one that read “The Gays” and another that read “I’m Garbage.” Miley glowed in the video, which she hilariously credited to her phone not a filter. “No, it’s not a filter, my phone’s just dirty, she joked.

Miley — who identifies as pansexual — has long been an advocate for the LGBTQ+ community. She founded the Happy Hippie Foundation in 2014 to help provide financial support to LGBTQ+ youths in need. “I’m an openly gender fluid person and I have always been honest about my sexuality. It’s been important to me not only to show pride for who I am, but to encourage my fans to always be true to who they are,” she said to Vogue magazine in 2018.

At the time, she was launching a collaboration with Converse and Happy Hippie that included brightly colored sneakers and clothing. Miley, publicly dated Kaitlynn Carter, 32, after the end of her marriage to Liam Hemsworth, 30, has also been open about her thoughts on the concept of marriage in the modern era. “The reason that people get married sometimes can be old-fashioned, but I think the reason we got married isn’t old-fashioned — I actually think it’s kind of New Age,” said to Vanity Fair. “We’re redefining, to be f***ing frank, what it looks like for someone that’s a queer person like myself to be in a hetero relationship.”

“A big part of my pride and my identity is being a queer person. What I preach is: People fall in love with people, not gender, not looks, not whatever,” she also said. “What I’m in love with exists on almost a spiritual level. It has nothing to do with sexuality. Relationships and partnerships in a new generation — I don’t think they have so much to do with sexuality or gender. Sex is actually a small part, and gender is a very small, almost irrelevant part of relationships.”