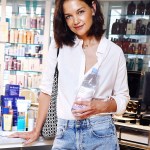 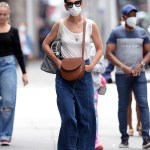 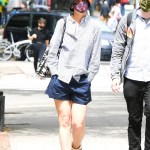 Katie Holmes looked fashionable in oversized jeans while shopping in NYC one day after A-Rod was spotted exiting her apartment building.

Katie Holmes was spotted strolling through NYC one day after Alex Rodriguez was photographed exiting her apartment building on June 13. The 42-year-old Batman Begins star enjoyed some shopping in Soho after meeting with a friend as news broke that the ex of Jennifer Lopez was seen leaving the luxury Manhattan address.

Although Katie lives in the building where A-Rod was seen, it is not clear whether or not he was there to visit the brunette beauty. Snapshots reveal the retired New York Yankees player walking out of the building lobby in a white t-shirt and khaki pants. It is not confirmed why he was in the apartment building.

The Dawson’s Creek alum went boho chic for her outing in a pair of oversized dark denim, high-waisted jeans with a white tank, and matching sneakers. She swept her brunette locks up in a high bun and stayed hidden beneath dark movie star shades. Katie completed her low-key look with a brown leather handbag and a few dainty necklaces for some added sparkle.

Katie’s outing comes on the heels of news that things seem to be getting pretty serious between J.Lo and Ben Affleck. For the first time since rekindling their romance in April, Ben and Jen were spotted packing on the PDA in a new paparazzi video — oh, and her twins Max and Emme, 13, were right there, too!

The former exes didn’t shy away from making out during a romantic dinner at Nobu in Malibu on June 13. Jen can even be seen rubbing Ben’s face before leaning in for a kiss. He then nuzzles her neck and whispers something in her ear as she giggles uncontrollably.