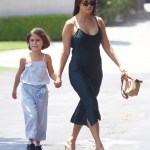 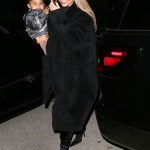 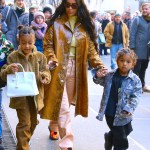 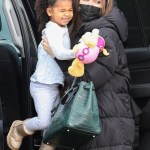 Kylie Jenner took to TikTok and shared a series of clips from her life, highlighting a sweet moment when she and her three-year-old daughter, Stormi Webster, wore matching Versace two-pieces!

Kylie Jenner is living her best life with baby girl Stormi Webster, and highlighted her gratitude with a touching TikTok post. In the video compilation, the Keeping Up With The Kardashians star, 23, showed her fans some sweet snapshots from her life set to the song “Remember That Night?” by Sara Kays with Adam Russell‘s “Happiness” monologue playing over the instrumental. Of the footage Kylie included in the TikTok post, which you can see below, one quick clip showed Kylie and three-year-old Stormi wearing matching Versace two-pieces!

Fans could just make out that the yellow Trésor de la Mer-print bikini top, which retails for $350, featured intricate patterns of star fish. The Trésor de la Mer-print bikini bottoms, which run $325, also featured the same pattern. The mother-daughter duo have never been averse to matching in the past, and with summer on the horizon, they’ve already proven that they’re ready to show off their twinning swimsuit style.

On May 9, Mother’s Day, Kylie took to Instagram and shared a collection of some of the sweetest, never-before-seen photos that she took with Stormi. Among the images was a picture of the mother-daughter pair sitting on the edge of the pool while sporting matching rainbow two-pieces! Kylie and Stormi looked absolutely adorable, and the Lip Kit mogul looked down at her daughter with all of the love in the world.

More recently, however, Kylie and Stormi have been spending some time with Stormi’s dad and Kylie’s former flame Travis Scott. On May 18, the rapper, 30, was spotted hanging out with Kylie and the former couple’s precious little one at Disneyland. The little family looked as though they were having such a blast together, enjoying the sunshine and fun times!

Ever since their split in fall 2019, Kylie and Travis have been incredibly dedicated to raising their daughter. The former couple have maintained a very strong bond since making the decision to go their separate ways. Fans love to see this trio out and about whenever they can! Here’s to more fun memories for this little family.