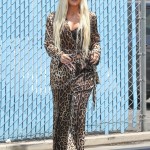 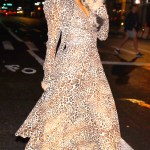 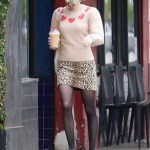 Halle Berry appeared to take inspiration from Kylie Jenner when she posed in a skintight leopard print bodysuit for a series of stunning snaps.

Halle Berry has seemingly channelled both her iconic Catwoman role, and Kylie Jenner‘s look from the “WAP” music video when she rocked an animal print bodysuit. The Oscar-winning actress, 54, took to Instagram on May 5 to share some stunning snaps of herself rocking a skintight leopard print latex look, with matching thigh-high heeled boots. In the first photo, she reached her arms above her head, highlighting her toned figure as she stood in front of a stone wall.

She pulled her golden brown tresses back into a bun, and offered the camera a subtle smile, as she shocked her glowing, natural beauty. “Hitting all the right spots,” she captioned the photo, which was reminiscent of the look worn by the youngest KarJenner sis in the music video for Cardi B‘s hit song “WAP”. “Purrrrfection,” one fan commented, while another wrote, “Is there anything you don’t look AMAZING in?”

It comes less than two weeks after Halle made her red carpet debut with her new beau Van Hunt. The pair attended the Oscars together, and Halle totally turned heads thanks to her new bowl haircut. The mom-of-two also recently revealed that might join the popular social media app TikTok. “To keep my cool points with my 13-year-old, I have to stay online. And I want to! I want to stay on top of culture, and be a part of my kids’ lives. I don’t want to seem like I’m trying to be younger than I am, but to stay connected to them, I have to stay connected to what’s happening in their world,” she told W Magazine on April 12.

Halle, who is such an incredible mom to daughter Nahla, 13, and son Maceo, 7, continued, “I might [join TikTok]. My daughter has been telling me, ‘Come on!’ I keep saying, ‘Honey, that’s another thing that I have to manage.’ You can’t just go on TikTok once or twice. If I’m gonna start TikTok, I have to keep TikTok-ing. She might convince me! She’s working hard on me. I just have to figure out a way I can do it that makes sense in my mind. If I can, then I’ll figure it out.”