Mom-of-two Halle Berry has shared a rare snap with her kids, daughter Nahla, 13, and son Maceo, 7. The 54-year-old actress took to Instagram on April 1 to share a sweet pic of the trio snuggling up together on the beach. “the moments that matter most…” she captioned the photo, which showed them sitting next to each other on the sand. Halle rocked an orange dress with bell sleeves, while both of her kids appeared to be rocking black ‘fits as they hugged their mom.

“Nothing more precious than a Mother’s Love,” one fan commented, while another wrote, “enjoy it they get so fast big.” Halle recently celebrated Nahla’s birthday, and marked the milestone of her becoming a teenager! “No matter how many times I tell her that I love her, I love her more than that,” Halle captioned a throwback pic of the pair laughing. “Happy 13th birthday Nahla Boo.”

Fans of Halle would know that she rarely shares photos of her kids on social media, but on a special occasion, she’ll sometimes give her followers glimpses of her two mini-me’s! Halle shares Nahla with her ex-boyfriend, Gabriel Aubry, who she started dating in 2005. The pair had a bitter custody battle following their 2010 split, and Gabriel contested Halle’s request to move Nahla to France, where her then-boyfriend, Olivier Martinez lived. That wouldn’t be the end of the drama, as a judge denied Halle’s request, and Gabriel and Olivier later got into a physical altercation. 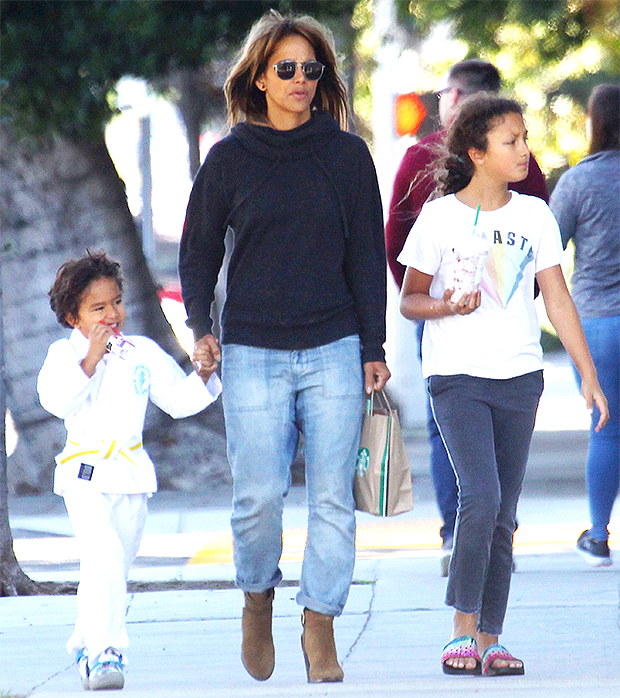 They eventually came to a custody agreement, and Halle got engaged to Olivier, with whom she shares son Maceo. The pair called it quits in 2015 and the actress has since found love with new beaa, Van Hunt. They went public with their relationship in September 2020 and Halle recently paid tribute to the singer on his 51st birthday. “A real woman can do it all by herself, but a real MAN won’t let her,” she wrote. “Happy birthday VanO. I only wish I’d known you sooner so I could have loved you longer.”