Madonna looked better than ever in a series of snaps she shared to Instagram on April 9.  The pop icon took to the social media platform to post three gorgeous selfies, which put her glowing complexion on display. “Damn I smell good………” the 62-year-old captioned the post, tagging Tom Ford and hash tagging their scent, “#roseprick.” In the pics, the “Vogue” singer rocked a large, luxe green robe which featured a sizable hood. She also donned long, platinum blonde locks as she accessorized with oversized, black sunglasses, gold hoop earrings, and layered gold necklaces

She also revealed she was wearing black, fishnet stockings and a pair of matching, green slippers. “Cuteness,” one fan commented, while another wrote, “Ur everything.” The post came just a few hours after she shared several videos to her Instagram Story, the first of which showed her daughter Mercy, 14, showing off her piano skills.

Although she usually keeps her children, out of the spotlight, Madonna has given fans a few glimpses at her youngster’s musical talent. In November, 2020 she proved her kids have inherited her dancing skills when she posted a video of her son David, 15, and Mercy practicing their moves. “It’s A Vibe,” the “Material Girl” hitmaker captioned the carousel post, which featured a video of the duo busting a move to “Smile” by JuiceWrld and The Weeknd. Mercy wore a red dress with a floral pattern, a matching bandana and plenty of gold jewelry. 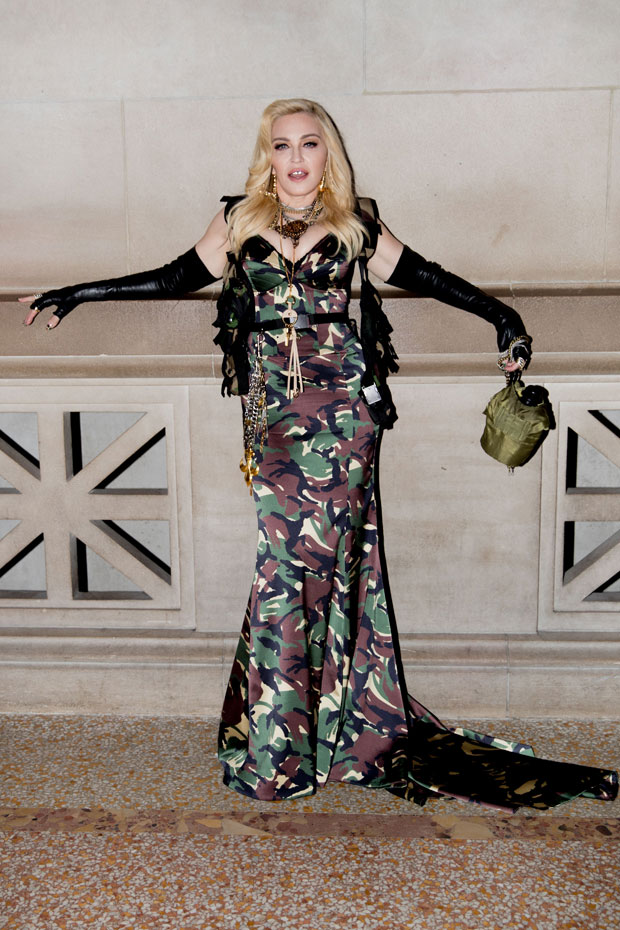 The pair have clearly been spending some time on TikTok as they expertly pulled off a series of popular moves while dancing around a bedroom. Another clip in the carousel post showed Mercy with her braided hair in two pigtails as she made a surprised face at the camera. Watch out Madonna, the kids are taking over!

The multi-Grammy winner’s family has grown exponentially over the years. She gave birth to her first child, Lourdes Leon, in October 1996 with fitness trainer Carlos Leon. Madonna then welcomed son Rocco Ritchie with ex-husband Guy four years later. Lastly, she added four more to her brood by adopting David, Mercy, and twins Stella and Estere.