Kim Kardashian, 40, has the most adorable kids ever. The KKW Beauty mogul posed for a series of pics with her mini me’s North West, 7, Saint West, 5, Chicago West, 3, and Psalm West, 1. “Tucked in tight, it’s my heart where you’ll stay.
Tomorrow I’ll love you even more than today,” she captioned the April 10 post. Kim rocked a beige dress with horizontal cutouts as she sat on a couch and cuddled her kids.

The first snap showed little Chicago aka her twin wearing a peach top with a pink, feathered skirt and matching peach slides. Her baby bro Psalm donned an all white ‘fit, including a jacket, pants and sneakers. Meanwhile, Saint rocked blue jeans, and a green top with braids in his hair as her eldest daughter North stunned in a neon orange top and denim shorts with matching braids.

“So so cute,” Queer Eye‘s Jonathan Van Ness commented, while Emily Ratajkowski dropped a heart eye emoji. The pic were taken during the KarJenner’s Palm Spring Easter getaway, however their dad Kanye West was noticeably absent. A source shared EXCLUSIVELY with HollywoodLife why the rapper, 43, hasn’t been doing as many performances as he usually did — especially prior to his split from Kim. “Kanye was up in Wyoming for Easter. Kanye’s Sunday Services have been suspended,” the source shared with HL. 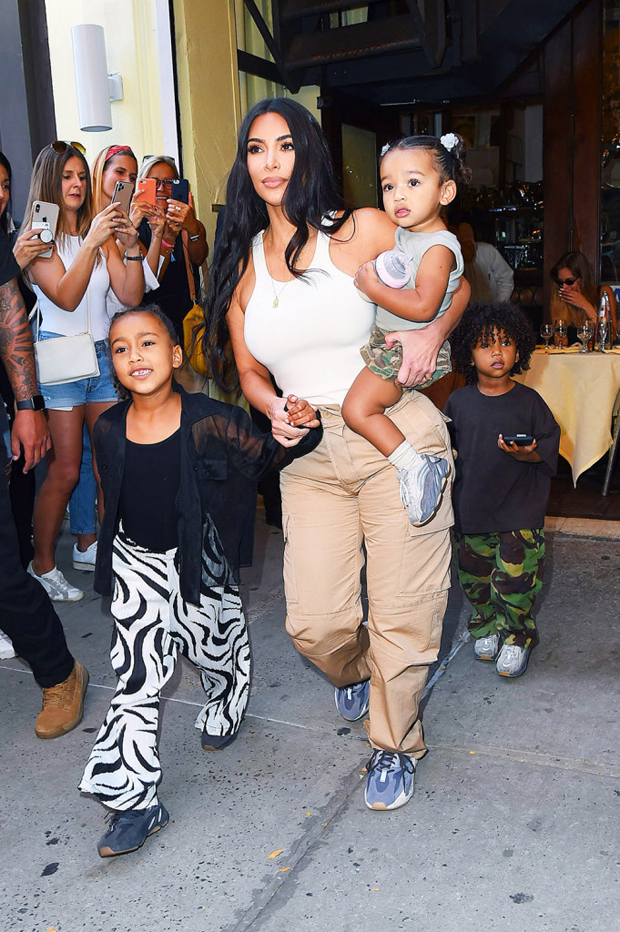 “Between 2-3 months ago, he did one in [Wyoming],” HL learned from the insider. The event, however, “was really private.” “It’s not like [what] he was doing before, because he didn’t have lots of people. It was exclusive and his people only, all because of COVID,” they went on. “He’s not doing them in the same way they were before where they’re being promoted and shown.” Fans of the couple would know the pair are still going through a divorce, after Kim filed in February 2021. The couple had been married for more than six years, tying the knot on May 24, 2014 — after they first began dating in April 2012.