Katharine McPhee is positively glowing! Three weeks after the American Idol alum, 36, welcomed her first child with husband David Foster, 71, she took to Instagram to share a photo of herself in a green silk dress for St Patrick’s Day. Katharine simply captioned the post with a four leaf clover, as she rocked the long-sleeved satin midi dress, which featured a high slit up one leg. The brunette beauty paired the ‘fit with nude pumps and a matching, green face mask.

It came one day after she revealed the name of her baby boy, who she gave birth to on February 24. “Okay, well, his name, we haven’t said anything. My husband probably will kill me for saying it, but his name is Rennie David Foster,” the Smash alum said while appearing on on Today with Hoda and Jenna, “We picked Rennie ’cause I’d actually been in labor for a while. We didn’t have a name picked out.”

Katharine continued, “We had a couple names, but my husband was on a text chain with his sisters and one of his sisters suggested an old family name. It was his great-grandfather’s name, his great-uncle’s name, so it has a long history in his family. My husband said, ‘Hi, Ren Foster,’ and so we said, ‘That’s a good name. It’s a strong name.'” A rep for the sweet couple confirmed in late February that the pair had gone from a duo to a trio. “Katharine McPhee and David Foster have welcomed a healthy baby boy. Mom, Dad and son are all doing wonderfully.” 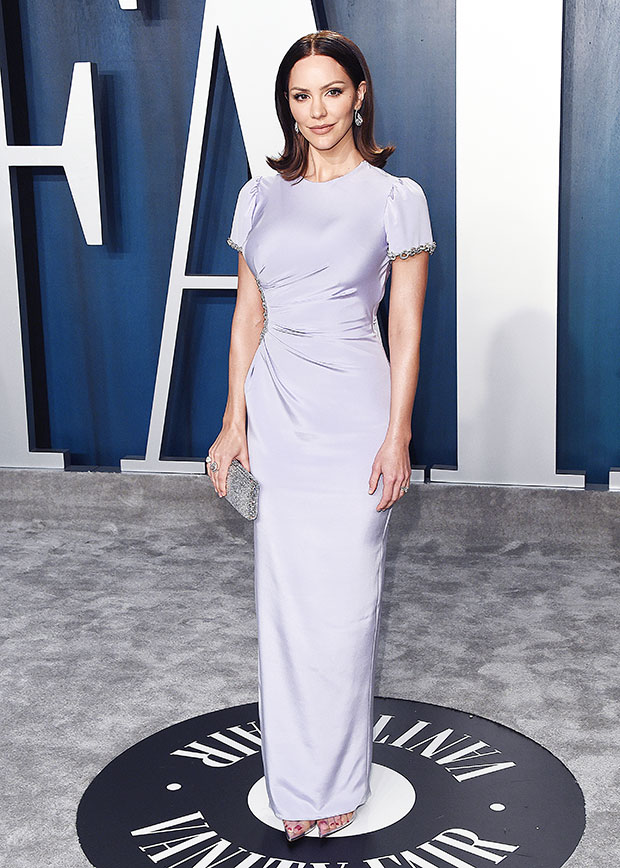 Recently, the mom-of-one gave fans their first glimpse of little Rennie in a sweet Instagram Story. “Just in case you were wondering… I love being a mommy!” the Broadway actress captioned a photo of herself taking the bub for a walk. She rocked a fitted black skirt, a white long-sleeve tee and a baby carrier around her chest for the March 6 outing. Fans first learned on October 8, 2020 that Katharine and David were expecting. Although Rennie is Katharine’s first child, David has five other children as well as seven grandchildren.