Tiger Woods is out of hospital, three weeks after he was involved in a serious car crash. On March 16, the professional golfer revealed that he left Cedars-Sinai Medical Center after undergoing multiple emergency surgeries for injuries sustained during the February 23 accident. “Happy to report that I am back home and continuing my recovery,” he began a statement on Twitter, which you can see below.

“I am so grateful for the outpouring of support and encouragement that I have received over the past few weeks,” Tiger continued. The father of two then expressed his gratitude for the hospital staff, adding, “Thank you to the incredible surgeons, doctors, nurses and staff at Harbor-UCLA Medical Center and Cedars-Sinai Medical Center. You have all taken such great care of me and I cannot thank you enough.”

Tiger concluded his note on an optimistic note, writing, “I will be recovering at home and working on getting stronger every day.” Fans were overjoyed to hear the news and showed their love with celebratory GIFs of the Masters champion.

Tiger is now on the mend, following the terrifying crash in which first responders were forced to extract the athlete from his vehicle using the Jaws of Life. He suffered “significant orthopedic injuries to his lower right extremity (leg)” and underwent an “emergency surgery” immediately afterwards, which his team revealed in a Twitter statement. After receiving “follow-up procedures,” Tiger’s team revealed that he was “recovering and in good spirits.” 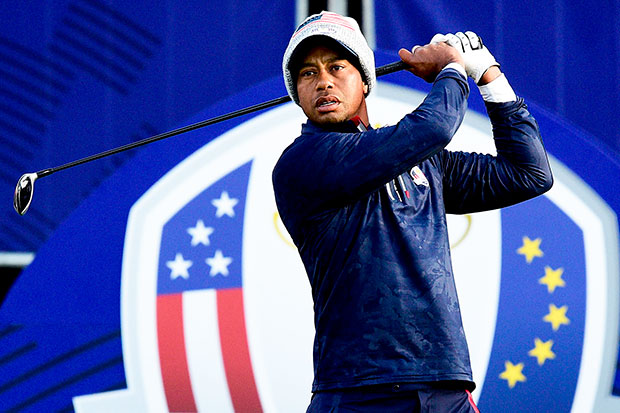 Five days after the accident, Tiger took to his own Twitter account to express his gratitude over the “touching” tribute his fellow golfers coordinated at the WGC-Workday Championship. Rory McIlroy, Phil Mickelson, Justin Thomas and Jason Day were just a few of the athletes in the event who wore red shirts in honor of Tiger. The golfing champ is known for sporting a red shirt while competing on the green. “It is hard to explain how touching today was when I turned on the tv and saw all the red shirts,” Tiger said. “To every golfer and every fan, you are truly helping me get through this tough time.”

It’s unclear how his serious leg injury will affect the future of his golf career, but it was previously reported by People that Tiger is determined to make a comeback. A top surgeon, who did not treat Tiger himself, also told HollywoodLife EXCLUSIVELY that Tiger’s track record of “coming back from adversity” was a good sign. “If I were to bet on someone with all those hurdles, with all those challenges, I would bet on that guy,” the surgeon told HL. “What I’m saying is, there is no one that is a better soldier, a better wizard at all of it, than Tiger.”