Britney Spears is showing off her fit new body in a dance video, admitting that she took up portion control to lose a few pounds, while still admitting her love of Doritos.

Britney Spears is feeling great, and it’s thanks to taking up a healthier eating practice, as well as her love of dancing. The 39-year-old shared an Instagram video on Feb. 23 where she displayed a lot more energy and adorable personality. She did some sexy moves to Otis Redding‘s 1968 R&B classic “Sittin’ On the Dock Of The Bay” while jamming out in her living room. Brit also shared her diet secret with fans, letting them know that eating by portion control is how she’s had a slim down over the past six months.

The “Toxic” singer began by referencing another Instagram dance video she posted on Feb. 18, where the caption read, “What can I say….I LOVE dancing and doing cardio in my living room!!!!!” But eagle-eyed fans pointed out she had already shared snippets from the same dance session in Aug. and Sept. 2020 and it wasn’t current. “The last video that I posted of me dancing was from months ago…” Britney admitted about the vid of her dancing in a black sports bra and tiny yellow patterned shorts.

She then implied she was heavier in late summer and that her body was looking and feeling better now. “Hence why my body looks a little different in this new video!!!” she continued. Britney looked fabulous in a white crop top, tiny pink striped shorts and black socks. Her waistline was slightly trimmer and her stomach more toned. Here’s the throwback video she posted on the 18th, without noting that it was six months old:

“No…I didn’t follow through with the ice cream diet….” she added, referring to one of her four big goals to try out in 2021. “I chose portion control which is very hard when it comes to Doritos!!!!!” she joked, before admitting, “On a positive note…my body does feel way better now!!!!” The singer didn’t reveal how many pounds she had lost, but Britney looks amazing! And she was totally feeling herself, showing more personality in her dancing than she has in months.

Brit mouthed along with the song, keeping eye contact with the camera and making her body motions match the lyrics, instead of her usual twirls and hair flips. She even got super sassy when part of Otis Redding and Carla Thomas‘ “Tramp” came on, wagging her finger at the camera to Carla giving Otis a hard time and lip synching along, genuinely performing for the camera instead of just dancing. It’s like the old Britney is coming back! 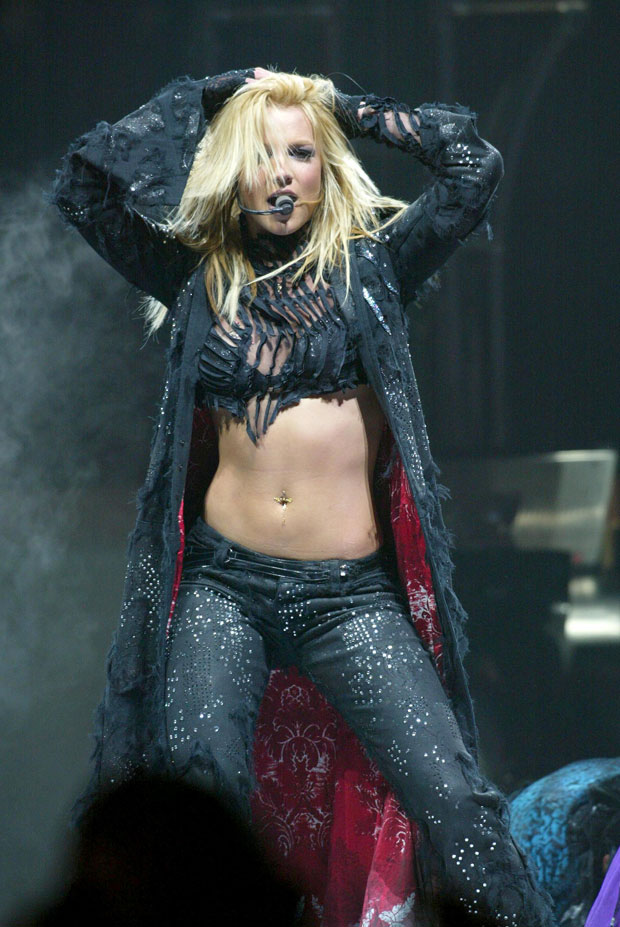 She’s also getting serious about upping her dance game. Brit noted that she ordered lyrical shoes, which are half soled soft dance shoes that cover the toes and balls of the foot. They’re often used for modern dancing and the flowing movement that comes with it, and Britney simply loves to freeform dance.

The “Til The World Ends” singer explained to fans, “If you’re wondering why I have socks at the tip of my toes…well I’m waiting for real lyrical shoes!!!! The marble floor has done a number on my feet with blisters so white tape covered with a black sock will have to do for now!!!! My lyrical shoes come tomorrow and I haven’t worn a pair since I was 9 so I’m sure they’re even better these days !!! God bless and sending love to all of you!!!” she excitedly told fans. We can’t wait for Feb. 24 to roll around and see Britney in action in real dancing shoes! She’s going to be putting out so many more exciting new dance videos with the greater freedom of movement.