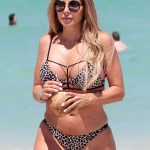 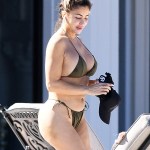 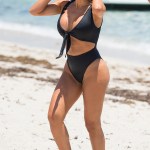 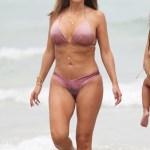 Larsa Pippen proved that she would never ‘miss a leg workout’ with her latest post to Instagram! Check out the stunner rocking a rhinestone, string bikini while working on her tan poolside.

Larsa Pippen has officially reclaimed her crown as bikini queen, and long may she reign! The mother-of-four, 46, took to Instagram on February 8 and showed off her latest two-piece look while working on her golden tan by the pool. In the photo, Larsa was perfectly posed on the edge of the pool, reclining on her arms so fans could see her dazzling bikini (which was designed by Oh Polly).

The former Real Housewives of Miami star’s two-piece featured a slew of rhinestones on top of the black fabric that made up her bikini. The cut featured halter and upper-torso strings that tied in the back and a cheeky set of bottoms. Larsa appeared as if she’d just gotten out of the pool — her hair seemed slightly damp. The starlet’s long legs extended into the shallow end of the pool of water and Larsa looked so relaxed in her sunglasses.

“I never miss a leg workout,” Larsa captioned the image, tagging Oh Polly. Larsa’s Instagram has seen a lot more bikini and swimsuit pics recently. Just a few short weeks ago on January 21, the stunner took to her favorite social media platform to show off her black and white two-piece, which you can see below! Larsa was totally in “love” with “sunny dayzzz” in the snap, and looked totally statuesque and stunning!

While Larsa has been the unassailable bikini queen as of late, she’s seemingly been keeping fairly low-key amid drama with her BF Malik Beasley. The 24-year-old basketball star is going through a lot with his estranged wife, Montana Yao, as their marriage comes to an end. But through it all, Larsa, who’s also estranged from her husband, Scottie Pippen, has been entertaining her fans on Instagram with her various looks.

Beyond her bikini snaps, the star has also shared photos of herself in casual and formal looks, and even in one outfit where she wore an unbuttoned top with no shirt underneath! But, at the end of the day, Larsa will always be a true bikini queen! We cannot wait to see what she shares next!