WWE Superstar Mike “The Miz” Mizanin wed former WWE Divas champion Maryse Ouellet less than a week after Valentine’s Day in 2014, so it’s always a romantic time in the couple’s household with those two celebrations of love so close together. We caught up with The Miz following his dramatic encounter with rapper Bad Bunny that cost him a chance to win at the WWE’s Royal Rumble, and in an EXCLUSIVE interview, he tells HollywoodLife.com what really went down, as well as the plans he has in store for his wife come Valentine’s Day. 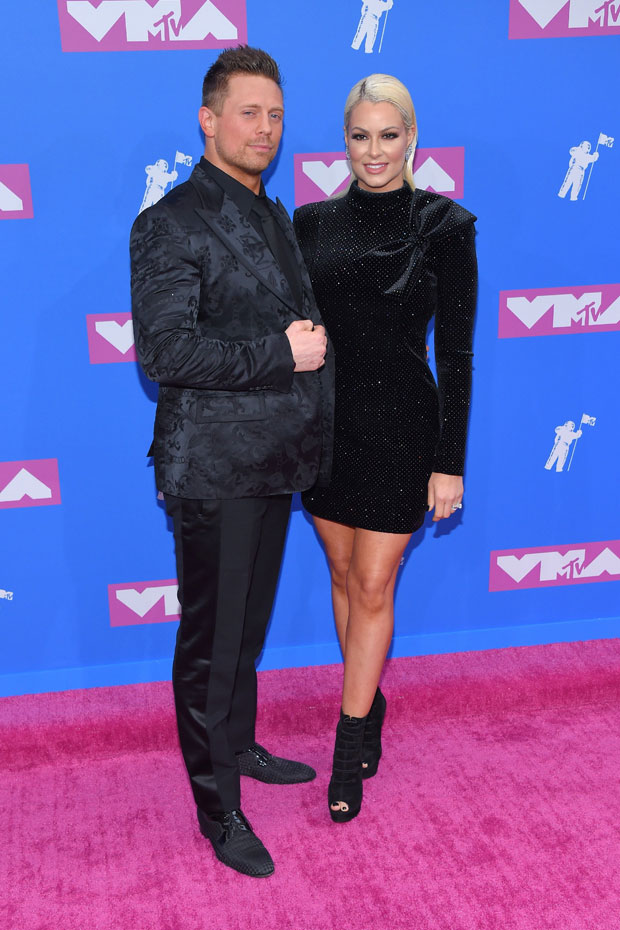 Mike ‘The Miz’ Mizanin and wife Maryse are about to celebrate seven years of wedded bliss. Photo credit: MEGA.

“I do that on a daily basis, but you give a little extra for Valentine’s Day and our anniversary so…I haven’t figured out exactly what we are going to do, because I want to make sure that we are able to do something. But I will make sure that it is extra special for her,” he continues.

The couple wed six days after Valentine’s Day on Feb. 20, 2014, in a ceremony in the Bahamas attended by a slew of wrestling greats, including John Morrison, Dolph Ziggler, Alex Riley, ring announcer Justin Roberts and former WWE Diva Kelly Kelly. The pair is just as in love today as when they tied the knot. But before Valentine’s Day and The Miz and Maryse’s anniversary is another big day, Super Bowl Sunday on Feb. 7! 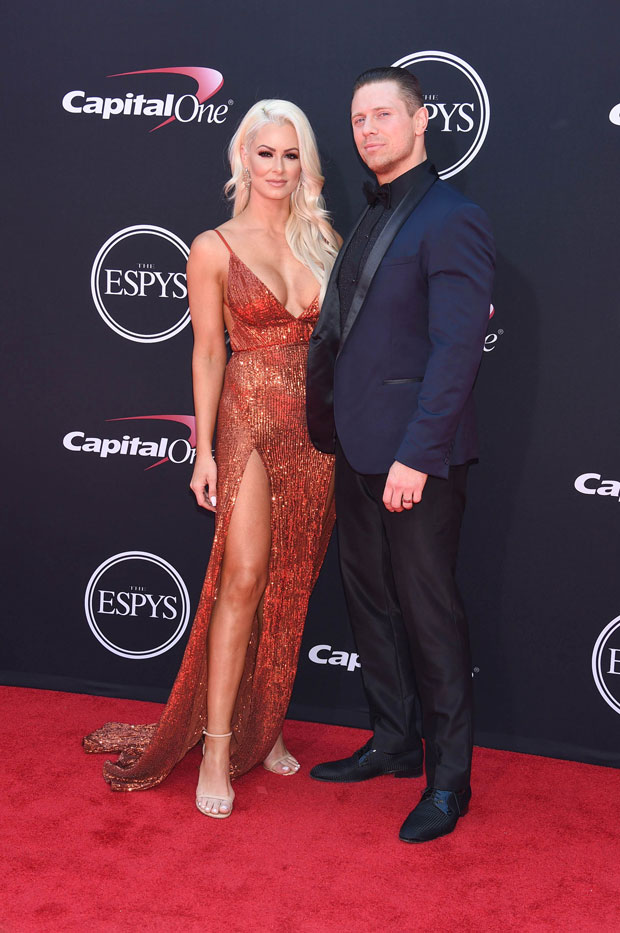 The Miz and Maryse have been married since 2014. Photo credit: MEGA.

With superstar quarterbacks Tom Brady, 43, of Tampa Bay and Patrick Mahomes, 25, of the K.C. Chiefs about to square off in Super Bowl 55, we had to ask The Miz about his prediction for the winner of the big game. “I am ready for the Super Bowl, I think it is this simple. Whoever has the least turnovers will win the game. So if you look at who has had the most turnovers in the past, I honestly believe that Patrick Mahomes might be able to take it to Tom Brady,” The Miz tells us, adding “You know when Tom Brady needs to, he comes in the clutch. But I think Patrick Mahomes is going to beat him and I think Patrick Mahomes and the Kansas City Chiefs are going to be a two time Super Bowl champs.

As for what went down at the recent Royal Rumble, The Miz broke it all down for us. Check out more from the interview below:

So, you had a wild 24 hours with Bad Bunny costing you the chance to win the Royal Rumble. Do you imagine this leading into a match with him, maybe at WrestleMania? Or maybe something else? Let’s discuss the whole situation, right? I get to the Royal Rumble and know that Bad Bunny is going to perform at the Royal Rumble. My wife and I saw him at the Super Bowl last year with JLO and Shakira. We were like, ‘Wow, that is incredible!’ I just wanted to extend an olive branch and say, ‘What’s up man, welcome to WWE!’ I wanted to welcome here, and I was like, ‘What an amazing job! Incredible!” And he was like, ‘Yeah, thanks!”

“Look, I am a fifteen-year veteran of the WWE. I have won every single title that there is to win. I feel like that I am one of the biggest names in the company and for me to come to you and your locker room, to shake your hand. It should be the other way around in my opinion, but then not only to be just like, ‘Yeah whatever!’

The Miz continued, “And slight me for Booker T? Look, Booker T is a legend and a Hall of Famer but I am in my prime, John Morrison is in his prime. It is just one of those things that if Booker T and Bad Bunny are such good friends, you think he would have taught him the respect of the backstage, so I felt slighted. So, what do I do when I feel slighted? I walked out for my entrance to the Royal Rumble, saw his DJ set and I showed him what happens when you disrespect the most must see WWE Superstar of all time. I destroy your DJ set. I went to the ring, was doing incredible, felt like I could win the Royal Rumble and obviously at the Royal Rumble you need your head on a swivel, every man for themselves. There is a bunch of guys in the ring looking to throw you off the top of the rope and things happen. And Bad Bunny came out and he was a little angry about the DJ set and distracted me. Long enough so Damian Priest could take advantage of me and throw me off the top rope.

“Then to add on top of that, Bad Bunny decided to get on top of the top rope and jump off on me and John Morrison and basically embarrassing me not only in front of my peers but in front of millions watching at home. So yeah, I guess I am a little upset, but the thing is, I am a grown man. And I understand that things may have gotten out of hand, so, I invite Bad Bunny to come to Monday Night Raw, to actually discuss things further and just chat and talk like grown men. Maybe he will literally see the error in his ways and apologize.” 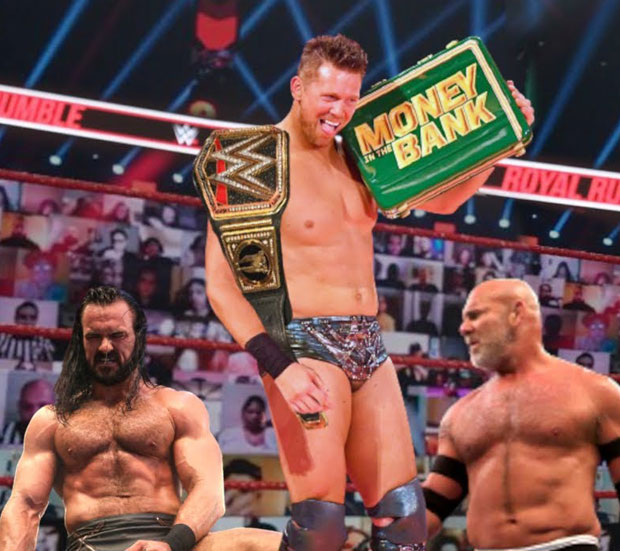 The Miz looking strong at the Royal Rumble. Photo Courtesy of The WWE.

Maybe you can do a collab? “Yeah, maybe do a collab. John Morrison and I have, ‘Hey Hey, Ho Ho’ and ‘Hey Hey Hey, Ho Ho!’ And he has a bunch of songs as well. So, let’s do a collab, let’s do something. Maybe we can show him how to become a WWE Superstar in the ring, that is all if he apologizes and be a big man about it. Be a man. Only time will tell.

If you collaborate, maybe you could win a Grammy? “Exactly, or maybe he can have another Grammy on his mantle! You know, maybe he can break another record and get another chart topper. Who knows! Or it could go the other way. He doesn’t apologize, he disrespects us even more, you are in my house. You don’t come into my house with muddy shoes on and just drag your feet all over my floor. You must show respect. Take off those shoes, shake my hand like a man but if you don’t…What happens when someone comes into your house with muddy shoes and disrespects you? They get thrown out.”