Kelly Ripa and Mark Consuelos have proven over and over that Father Time is their good friend. The power couple did it again in new Instagram posts that the 50-year-old daytime talk show host shared with fans, showing them as young parents with two of their three children. Only those babies are now young adults, as 23-year-old Michael and 19-year-old Lola are all grown up today. Yet in Kelly’s snapshots, she and Mark, 49, look like they haven’t aged a day since their children were so little.

The Live with Kelly and Ryan host shared the photos to her Instagram on Jan. 28. Even she knew that they were young parents with the caption, “#tbt 2001 Babies with their babies.” Lola seemed to be the star of the show since the was the true baby in 2001, having been born on June 16 of that year.

Mark was seen in the first photo holding infant Lola in a resort swimming pool. She had on pink baby swim diaper and a white sun hat to protect her fair skin from the sun. Mark’s handsome face looked exactly the same 20 years ago in the picture as it does today, as did his head of thick, luscious brunette locks.

In the second snapshot, Kelly was holding little Lola on the same vacation, with the blue ocean and palm trees behind them. The couple’s only daughter was dressed in an adorable pink dress with a tulle ballerina-style skirt. Kelly looked so incredibly youthful in the photo holding her baby girl, wearing a bubblegum pink tank top and dark pink drawstring pants. Her hair was in a shoulder-length bob similar to how it appears today.

The couple’s eldest child Michael could be seen in the lower left  side of the photo, looking up at his mom and sister while wearing a tropical shirt. He would have been about four-years-old at the time of the snapshot, and his face wasn’t visible, as his head was turned away from the camera to gaze at his mommy and little sis. In 2001 when the photos were taken, Kelly and Michael were still two years away from welcoming their third child, son Joaquin, who was born in Feb. 2003. 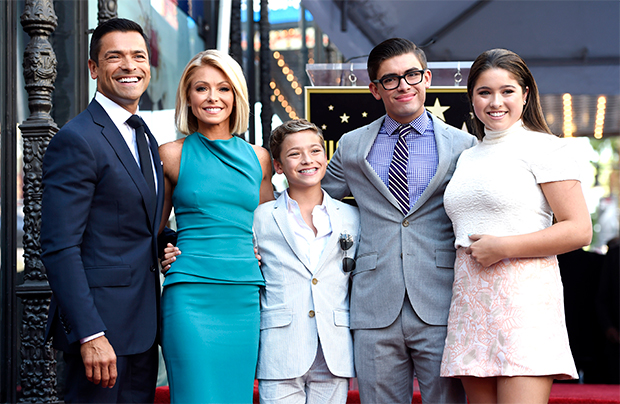 Kelly Ripa poses with her husband Mark Consuelos and their children Joaquin, Michael and Lola during a ceremony awarding the TV host with a star on the Hollywood Walk of Fame on Oct. 12, 2015. Photo credit: AP.

Mark absolutely loved his wife’s walk down memory lane to when Lola was still an infant and Michael was their little boy. “I love these pics so much!!!” he wrote in the comments, as Kelly responded, “@instasuelos i wish we could go back in time for like a minute,” to be with their children as little ones again.

Fans chimed in about how Kelly and Mark look exactly the same today as opposed to the photos from 20 years ago. User @kirstenwyant07 commented, “Both of you never age,” while @morewine4me asked, “Soooo Mark just doesn’t age?” Others cheered on Kelly’s still youthful appearance, with @lilymeade13 telling the TV host, “You don’t age either my friend kelly,” as @heidilknapp wrote, “Well neither do you Kelly! The two of you need to share your secrets,” about how they look exactly the same two decades after the photos were taken.