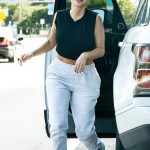 Larsa Pippen brought out her best little black swimsuit for a day at the beach in Miami just over two weeks after she was spotted holding hands with Malik Beasley at a mall. Check out the latest snaps of the star!

Larsa Pippen took some much needed rest and relaxation just over two weeks after she was spotted holding hands with Malik Beasley at a mall. The former Real Housewives of Miami star, 46, took to the beach with some gal pals to soak up the sun and get away from any more drama. Larsa sported a little black one-piece swimsuit by Norma Kamali, which featured a low-cut backline and plunging neckline.

The mother-of-four accessorized her swimsuit with a pair of bold black sunglasses, keeping with the monochromatic look that she was working. Finally she donned her highlighted hair into a messy bun, and enjoyed the sun and sand will sipping on a delicious iced beverage. But the casual photos come just two weeks after fans of the star, who battled COVID-19 in November, was spotted holding hands with a certain Minnesota Timberwolves player on November 23.

Drama ensued when Larsa was seen hand-in-hand with Malik Beasley, 24, at a mall in Miami. Just days after the photos went public, Malik’s wife, Montana Yao, took to Instagram to issue a message that seemingly alluded to the photographs. “Wow…I don’t even know this man,” Montana began the December 1 statement on her Instagram Story. “This is wild y’all I’m seeing it for the first time just like y’all.” Montana and Malick share a young son together, a toddler named Makai.

For her part, Larsa has also been sharing cryptic messages on social media in light of the drama that’s taken place. “Don’t judge me until you know me. Don’t underestimate me until you challenge me, And don’t talk about me until you’ve talked to me,” the December 4 message from her Instagram account read. But Larsa wasn’t finished.

Since her mall excursion with Malik, Larsa has stepped out in her classic style while also posting veiled messages about the November 23 photos. “Maybe spend more time loving and less hating. It’s not chasing my life but it might change yours,” she wrote in a December 7 message to her Instagram followers. As all of this is going down, Larsa is still legally married to her estranged husband, former NBA star Scottie Pippen. The couple separated in 2015 before reconciling. But Larsa eventually filed for divorce in 2018. Their divorce has yet to be finalized.