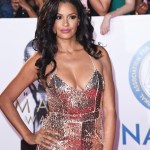 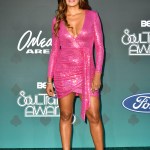 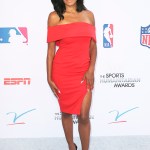 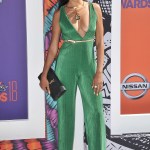 Former ‘Apprentice’ star Claudia Jordan has some harsh words for Kanye West amid the rapper’s bid to become President of the United States.

Kim Kardashian working with Donald Trump to push for prison reform has made her more of an “ally” to African-Americans than her MAGA-loving husband, Kanye West.

Former Celebrity Apprentice star Claudia Jordan shared these harsh opinions with HollywoodLife during an interview when she admitted she’s “embarrassed” by the way the rapper acts around the president.

Claudia, 47, also admitted that she is “disappointed” that the 43-year-old rapper is making a bid for the White House.

“On one hand, people can say, ‘Oh, he’s just so brilliant. You just don’t understand,’” she said, when asked about his campaign. “I remember Kanye West used to come to Jamie Foxx’s house when Jamie had the little studio before [he] got the big, huge house,” Claudia said. “And he was humble. He was kind, he used to smile. He had his backpack, he would produce songs and he was great as a producer. And I don’t know what is happening with him now, but he’s a smart man. I think.”

Kanye has sparked anger ever since he announced on July 4 that he’s running for president. Days later, the rapper – who has been a vocal supporter of Trump – told Forbes that he was “taking the red hat off” and running as a third party candidate.

But, in an August interview with the same publication, he refused to deny that his campaign is part of coordinated bid to siphon votes away from Democrat Joe Biden. (A CNN report claimed that Republican political operatives tied to Trump were trying to get the rapper on the election ballot in numerous states.)

“I just don’t see how he doesn’t see that he’s being so used right now,” Claudia said. “And get out of the way. You’re not going to win the presidency. If you’re just there to… try to siphon votes from Joe Biden’s, that’s not the right thing to do. Let your guy win on his own merits.”

When it comes to working with Trump, Claudia admitted that she is far more impressed with Kanye’s wife Kim. In 2018 she successfully pleaded with the president to give clemency to Alice Marie Johnson, a Black grandmother who was sentenced to life in prison for a non-violent drug offence.

Kim, 40, also collaborated with criminal justice reformers and President Trump’s son-in-law Jared Kushner to push for the First Step Act to reduce sentencing and rehabilitate prisoners. Both are key issues in the fight to address mass incarceration, which has disproportionately affected African-Americans.

“I just feel like, Kim to me is more of an ally to the black community…” Claudia said. “She’s over here to try to help get people free from prison. Even though I know Donald Trump probably does it ‘cause it’s like a good PR move for him. Does he really care? Who knows? I don’t know.”

In contrast she had scathing words for Kanye who, in October 2018, donned a red MAGA baseball cap during an Oval Office visit as he hugged and professed his love for Trump. “But Kanye, the hugging of Donald Trump, the way he did like that, the bowing down,” Claudia said, “And I just was like, what are you doing, as a man? It just was so… I was embarrassed. I cringed when I saw it, but much respect to Kim Kardashian. I love what she’s been doing and using her platform. Personally, who knows what she really feels about Donald Trump, but she’s using him the way he needs to be used. She knows he likes fame. He loves attention.”

Claudia, who once considered Trump a friend, added, “He likes when people seem to like him and she is very smart when it comes to that. I have no complaints with what she’s doing, can’t no one say nothing to me about Kim Kardashian right now.” As for Kanye, who has publicly admitted to having bipolar disorder, Claudia says, “[If] he’s going through something mentally, I hope he gets help…”

She also admonished him for some of his controversial comments, like saying that slavery was a choice, during a 2018 TMZ appearance and declaring at a 2020 South Carolina political rally that Harriet Tubman “never actually freed the slaves.” “The slavery was a choice, Harriet Tubman, all this. Listen, don’t come for our heroes,” Claudia said. Calling the situation a “hot ass mess,” she added, “I would rather him to be back in the studio and out of the White House.”

Claudia, who is currently the host of Out Loud with Claudia Jordan on Fox Soul, has been very vocal about Trump recently. During an Oct. 14 episode of the podcast Behind The Velvet Rope With David Yontef, she alleged that the former reality star “tried to kiss” her “twice.” The White House has declined to comment on her allegations.