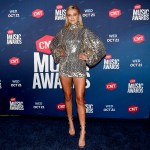 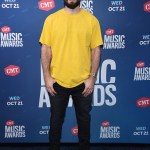 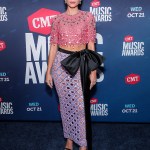 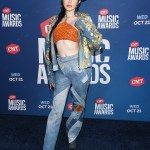 Look who’s back! Taylor Swift showed up to the 2020 CMT Awards virtually, and fans couldn’t get enough of her braid and red lipstick — a look she favored back in 2012 and 2013!

Taylor Swift, 30, is slowly but surely making her way back into the country music scene. The singer virtually attended the 2020 CMT Music Awards as a presenter. She announced Gabby Barrett as the winner of Breakthrough Video of the Year, and only appeared from the chest up via a video. However, it was enough to make fans go wild, as they freaked out over her hair, which was styled in a braid.

The 30-year-old had her signature bangs across her forehead, with a thin braid peeking out of the side of her head. She also wore a bold red lip. Fans couldn’t get over how much she looked like the Taylor Swift from the Red Era in 2012/2013. During that time, Taylor also had bangs, and often wore a braid when she sang her song “Mean” onstage. Of course, she’s always favored a red lip, too, but this era was when she really started going for it with the beauty look!

The braid @taylorswift13 the fucking braid
This proves Taylor wrote gorgeous about herself pic.twitter.com/6ztnY0RibL

This was Taylor’s first time at the CMT Awards since 2013, where she performed her song “Red” for the audience and viewers. She was also up for two awards that year, but didn’t win either of them. All together, Taylor has won six CMT Music Awards throughout her career. However, she made the decision to switch genres from country music to pop in 2014, which is why it’s been awhile since we’ve seen her at the show!

With her most recent album, folklore, which was released in July 2020, Taylor changed up her sound yet again. The album is labeled as ‘alternative,’ but one song, “Betty,” has been getting play at country radio. Taylor actually performed the track at the ACM Awards in September, so she definitely appears to be making a push to cross genres once again.

For the most part, though, Tay has kept a low profile amidst the coronavirus outbreak in 2020. Earlier this month, though, she did publicly endorse Joe Biden for president. Taylor began opening up about her political views in 2019, and has admitted that she regrets not doing so before Donald Trump got elected in 2016.

The 2020 CMT Awards were a bit different than usual due to restrictions put in place amidst the coronavirus. However, the night was still jam-packed with performances from stars like Kelsea Ballerini, Shania Twain, Maren Morris and more. The event was hosted by Kane Brown, Ashley McBryde and Sarah Hyland.