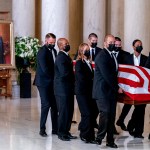 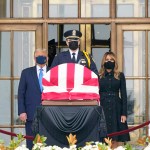 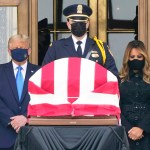 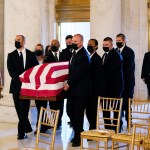 Donald and Melania Trump were met with loud booing from angry protesters as they paid respects to the late Justice Ruth Bader Ginsburg at the Supreme Court. They turned and left amid chants of ‘vote him out!’

President Donald Trump‘s visit to the Supreme Court, where the late Justice Ruth Bader Ginsburg is lying in repose following her September 19 death, was cut short when he was confronted by angry protesters. Trump, accompanied by First Lady Melania Trump, was met with a chorus of boos from Justice Ginsburg’s mourners during their brief visit, and a crowd chanting “vote him out” as he stood silently.

Trump at the court as crowd chants “vote him out” — it’s rare for this President to see his opposition this up-close and in-person pic.twitter.com/VEVkRHOkjM

Video from the September 24 incident showed President Trump, wearing a black protective face mask (a rarity), standing beside Justice Ginsburg‘s American flag-draped casket and barely reacting to the chants. After about a minute, he turned around and left with his wife. It was a remarkable moment; as CNN White House reporter Kevin Liptak wrote on Twitter, “it’s rare for this president to see his opposition this up-close and in-person.”

Justice Ginsburg’s body was laid in repose at the Supreme Court, where she sat on the bench for 27 years, on September 23. She was honored with a ceremony from a female rabbi and a eulogy from Chief Justice John Roberts. Current and former law clerks lined the steps of the Supreme Court in silence as her casket was carried by Supreme Court police. Her casket will next move to the Capitol, where Ginsburg will lie in state — the first woman in US history to ever do so.

Trump has vowed to name Ginsburg’s replacement in the Supreme Court as quickly as possible, drowning outcry from Democrats that a new pick should wait until after the November 3 election. After all, Senate Majority Leader Mitch McConnell (R-KY) refused to let former President Barack Obama select Antonin Scalia‘s replacement in 2016 because it was an election year. As of September 24, Republicans have secured enough votes for Trump to announce his nominee.

He has vowed to wait until after Justice Ginsburg’s memorial services are over, out of respect. It’s thought that Trump will pick Amy Coney Barrett, a 48-year-old judge from the 7th US Circuit Court of Appeals. Ginsburg, a liberal champion of women’s rights, would be replaced by an ultra-conservative originalist who opposes abortion and same-sex marriage. Barrett is also associated with People of Praise, a controversial religious group that inspired Margaret Atwood‘s The Handmaid’s Tale.